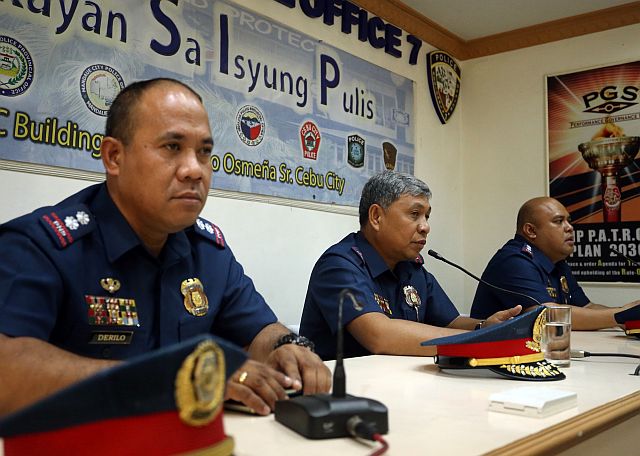 PRO 7 Dir. Chief Supt. Patrocinio Comendador Jr. (center) warns illegal drug personalities to surrender now, after the escape of some members of an illegal drug syndicate during a police operation. With him are Supt. Rex Derilo and Supt. George Ylanan in a press conference in Bohol. (CDN PHOTO/LITO TECSON)

Comendador’s appeal could well be directed to each and every drug peddler operating in the region as the Philippine National Police in Central Visayas vowed to arrest not just some but all drug dealers and syndicates here.

Suspected drug lord David Anunciado and four of his alleged cohorts were killed in a shootout with policemen last Sunday following a carefully-hatched anti-drug operation which police said involved a thorough study of Anunciado’s hideout.

Supt. George Ylanan, acting chief of the Regional Special Operations Group, said the plan engaged the services of a private dumptruck to serve as cover for the raiding team as the area was close to a quarry.

“We had to innovate our plans so we can penetrate the place,” he said.

Ylanan, who led the raiding team, said that they hid themselves in the dumptruck so that the lookouts who, according to police, included habal-habal drivers in the village would not notice them.

“Since there were quarrying operations in the place, residents there usually see dumptrucks. So we decided to rent one of the trucks and use it in our operation,” he said.

As they neared a nipa hut that served as Anunciado’s safe house and police got off from the truck, the gang’s lookouts began to fire warning shots.

“We were really expecting a gun fight. And it happened,” Ylanan said.

Police immediately ran after the suspects and killed five of them, including the group’s leader, Anunciado.

Three others were arrested while over five members of the Anunciado Group managed to escape.

Police were armed with two search warrants, one against Anunciado and the other against a certain Edwin Estoce Puhas, for violation of Republic Act 10591 or the Comprehensive Firearms and Ammunition Regulation Act.

Puhas was not around during the raid, according to police, prompting Comendador to declare that it would be better for Puhas and other criminals to surrender.

“While there is still time to surrender, they better grab it. The place for drug peddlers is getting smaller,” he told reporters.

“Stop destroying the lives of people especially the youth because we will enforce the law. We are serious in our campaign against illegal drugs and we will really run after them,” Comendador added.

The region’s highest-ranking police official also challenged all policemen to assert themselves in every place where they are assigned and protect residents who fear drug syndicates.

“This is the time for our policemen to show who really are in control. You should assert authority in maintaining peace and order,” Comendador said.

About P3.3 million worth of shabu (Methamphetamine Hydrochloride) were seized by policemen during Sunday’s operation conducted by the Regional Intelligence Division 7, Regional Public Safety Battalion, and the Inabanga Police.

“For now, these are speculations. But I’m certain that they (drug dealers) are not ‘untouchables’ in the area,” Derilo said.

“No Drug Protectors” in Bohol LGU

But as far as the Bohol provincial government is concerned, no local officials are protecting illegal drug dealers in the province.

Bohol provincial administrator Alfonso Damalerio told CEBU DAILY NEWS that they have been consistent with their stand on an “all-out war against illegal drugs.”

“We have fully supported our law enforcement units in their operations against illegal drugs and all forms of criminality,” Damalerio said, reacting to speculations surrounding Bohol’s thriving illegal drug trade.

Damalerio said that reports of drug raids all over the province by police authorities are proof that local officials are doing their part in the intensified campaign against illegal drugs in Bohol in tandem with police authorities in the region.

Damalerio cited some “challenges” in Bohol’s anti-illegal drug campaign which include the lack of cooperation from residents of drug-prone communities, the transfer of police assignments to other provinces and cities amid ongoing operations, low conviction rates, and the need of more cops to augment police operations.

“There should be a separate drugs court to expedite illegal drugs cases. Security measures in all ports and seaports should be heightened by port authorities,” Damalerio said.

Because of these challenges, officials are trying their best to put in place measures that are needed to face the problem head on such as regular and frequent police patrols to monitor drug couriers going in and out of the province, the Bohol provincial administrator added.

They are also intensifying coastal law enforcement units (CLEC) and the involvement of the Maritime Police, he said.
Based on intelligence reports, Anunciado’s group sourced their drugs from the national penitentiary in Muntinlupa, Metro Manila for distribution in Bohol.

The raid on Anunciado’s safe house came a week after Cebu-based operatives also swooped down on the hideout of Cebu City’s number 3 most wanted drug personality Rowen Secretaria on Banacon Island, Getafe, Bohol which killed Secretaria and two of his alleged cohorts.

Police in the region vowed to conduct more anti-illegal drug operations in Bohol in the coming days.