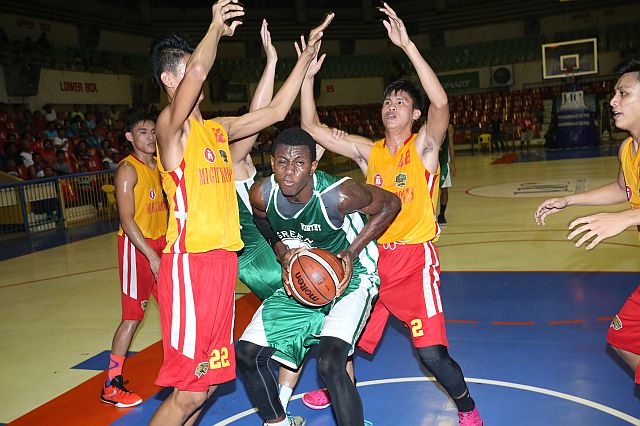 The Worthy-University of the Visayas (UV) Green Lancers inched closer to retaining their crown as they dominated the Mighty Sports-University of San Jose-Recoletos (USJ-R) Jaguars, 80-67, last night in Game 1 of the 8th Cesafi Partner’s Cup best-of-three finals at the Cebu Coliseum.

The Green Lancers had five players scoring in double figures, banking on a balanced attack to lead from start to finish.

Apart from moving a win away from snatching the crown, the Green Lancers scored some measure of revenge as they avenged their 72-79 semifinal loss — their only defeat in 10 games in the tournament — to the same USJ-R squad.

The Jaguars were led by RJ Dinolan’s 18 points and also got 14, 12 and 10 markers from from Tricky Feromingan, Melvin Navara and Jaybie Mantillan, respectively.

The Cobras missed out on a finals berth due to an inferior points differential and Tallo, the reigning back-to-back Cesafi MVP, secured the consolation trophy by sinking the game’s biggest shot.

The Webmasters trailed for most of the way but surged ahead in the final 2:07 when Justin Dacalos nailed a booming triple.

The Cobras retook the lead, 59-57, when William Polican answered with his own conversion from the three-point land with 1:13 to go.

UC tied the contest at 59-all following a fastbreak play by Dacalos.

The game-winning play had Tallo dribbling the time away before pulling up for the huge trifecta.

Dacalos was forced to take a hurried three-point shot in the next possession — an attempt that didn’t even hit the rim.

“A third place finish was okay but we need to work on a lot of things if we are to compete well in the upcoming Cesafi season. We have a handful of new players, so we have to improve out chemistry,” said SWU assistant coach Mike Reyes.

SWU had a chance of making it to the championship round after tying UV and USJ-R’s semifinal records at 2-1 (win-loss). The Cobras were knocked off from the title contention after tallying the lowest points differential.

Dacalos led the way for UC with 11 markers, while Garciano Puerto donated 10.