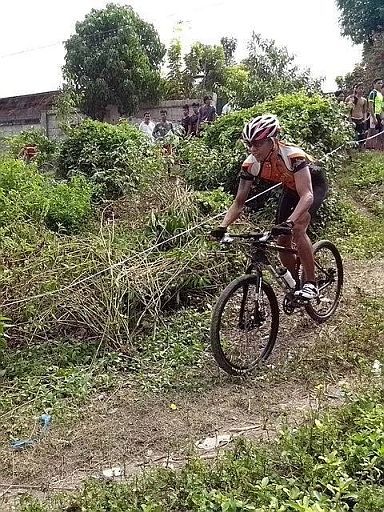 Despite suffering a leg injury from training and getting bitten by a dog, Jun Duron says he is ready to compete against some of Asia’s top daredevils in the 3rd annual Mountain Bike Asian Invitational – Philippine National Championships at Danasan Eco Adventure Park, Danao City slated today and tomorrow.

The 30-year old Duron said this is the hardest track he has ever encountered after testing the route yesterday and last Tuesday.

But the Talisay City cyclist remains upbeat on his chances of finishing the Cross Country race, where he competes in the Men’s Masters A class.

“There are three-feet tall ramps. There are drops as tall as my waist. The section is very deep. The route is very dangerous; [I just want] to finish safely. That’s all I can think of” said a determined Duron, who injured his leg Thursday of last week. He also had to be injected with rabies vaccine after getting bitten by a dog this Thursday.

Organizers also expect the best performances from over 140 hopefuls and contenders in the Union Cycliste Internationale (UCI)-sanctioned race.

Among the top competitors are UCI 243rd ranked Pinoy John Derick Farr of Team Prima and 320th ranked Indonesian 25-year-old Hildan Atosma Katana of Jabar MTB Team. They are the top contenders in the Downhill Men’s Elite 17-Above.

In the cross-country division, the Philippines’ Ariana Dormitorio (526th) and Indonesia’s Kusmawati Yazid of Jabar MTB are the top cyclists in the Women’s Elite 19-Above.