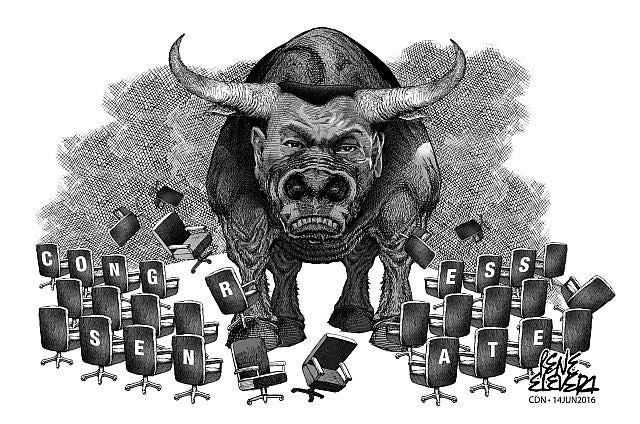 He has the super majority in Congress so it’s still a wonder why President Rodrigo Duterte would still call on lawmakers aligned with the PDP-Laban to “not get in his way” when it comes to stamping out crime in the country.

In meetings with incoming House Speaker Pantaleon Alvarez and presumably with allies in the Senate as well, the incoming president made it known in no uncertain terms that he will wage war not only against the drug lords but the major crime syndicates that he blames for “killing the country.”

As if his declaration that he “will kill those who are killing the country” not enough to scare or intimidate the miscreants, his personal choice for PNP chief, Chief Supt. Ronald “Bato” dela Rosa, challenged those who placed a P50-million bounty on him and President-elect Duterte, to bring it on.

Anyone expecting the president-elect to play by the rules when it comes to dealing with criminal suspects may just as well be fooling themselves since Mr. Duterte made it clear that blood will flow if the hoodlums won’t surrender, change their ways or leave the country.

But as he has shown in his latest dealings with the media, Duterte isn’t one to hold his peace when it comes to any congressional inquiry into his war against crime.

Knowing that any congressional inquiry will invite public scrutiny and attention, the president-elect doesn’t want his allies in the House to stir up any trouble and draw dissension from the public whom he would totally want on his side when the war against crime heats up.

And knowing how Congress folds up whenever the sitting president makes his or her intentions known, it won’t come as a surprise if the Lower House will remain silent.

It would be the Senate then which, despite being peopled by allies and Liberal Party (LP) lawmakers who expressed a willingness to cooperate with the Duterte administration, that will likely bother questioning the campaign against crime.

While we’re not surprised by Senators-elect Leila de Lima and Riza Hontiveros-Baraquel doing a lot of the questioning, it’s quite a surprise to hear incoming Sen. Panfilo Lacson also raising some noise on Duterte’s anti-crime campaign, since he was also accused of shedding much blood in campaigns like the alleged Kuratong Baleleng rubout.

While the senator-elect had also said he supports a tougher war on crime, it’s likely that he was merely reacting to Duterte’s warning to the Lower House since he perceives it to be as tantamount to stepping on congressional independence.

Whatever happens, the public will at least be reassured that there are officials who won’t simply roll over, who would bother asking the tough questions to see if the war on crime doesn’t come unhinged.

Read Next
Media in the Age of Duterte