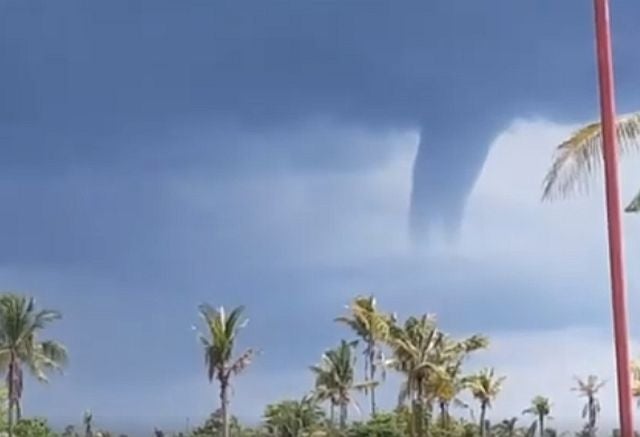 Screengrabbed from the 46-second video taken by Lance Punay outside his home in Daanbantayan which he posted on his Facebook account and went viral.

“Yes, it is possible to have two waterspouts at the same time in one place. That day there were two developing thunderstorm activities that happened in the town,” Pagasa Mactan chief Alfredo Quiblat said.

Pagasa Mactan issued a thunderstorm warning at 10 a.m. for the towns of Daanbantayan, Medellin and the whole Bantayan Island.

Last Sunday, Lance Punay uploaded a 46-second video of two waterspouts some distance outside his home in Barangay Poblacion, Daanbantayan on his Facebook account.

Punay told Cebu Daily News that the two waterspouts were seen on the waters off Barangays Tapilon and Maya.

Punay said he was sleeping at that time when his friend woke him up and told him about the waterspouts.

He brought with him his phone and immediately took the video.

“The waterspouts were spotted since 9 a.m. of that day by our neighbors,” Punay said.

Outgoing Daanbantayan Mayor Augusto Corro told Cebu Daily News that so far no damage has been reported in the town.

Quiblat also confirmed that another thunderstorm warning was issued at 9 a.m. on the same day for some areas in Carmen.

There were two children who drowned in the Malubog River in Carmen last Sunday morning.

He advised parents not to leave their children outside for prolonged periods of time.

Read Next
Dep’t heads loyal to Rama, 47 casuals out this week