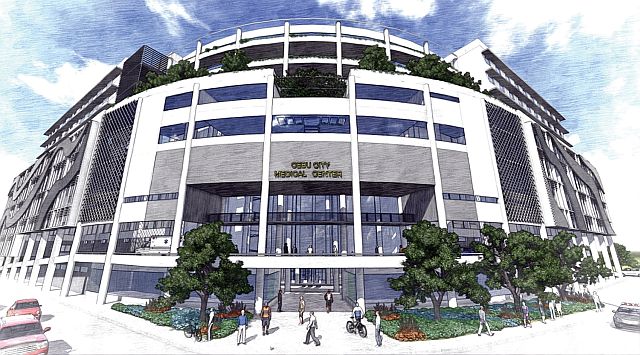 An artist’s sketch of the new CCMC building whose construction is ongoing. (CDN FILE)

Will the city government stop the construction of the Cebu City Medical Center (CCMC) after the acting chief of the Office of the Building Official (OBO) found out that a part of the foundation of the 10-story building had encroached on a still to be identified lot in front of ongoing construction in the Panganiban Street side?

Josefa Ylanan, officer-in-charge of OBO, said they will suspend the processing of the building permit of the new CCMC building until this problem is corrected.

Ylanan said they are still searching for the title of the unidentified lot.

Ylanan said she will meet this afternoon (Friday) with Cebu City Acting Mayor Margarita Osmeña, architects and contractors of CCMC, the Manila-based CE Padilla Construction, to find out whether or not they will stop the construction.

“There is a possibility to stop (the construction). But it could not be negative. For how long? I don’t know,” she said.

She said that the city has a geodetic engineer who looks into the parts of the lot and it has a lot number but it needs lot descriptions.

In the description of the lot, there was no mention that it’s a road lot; however, in the detail of the city ordinance, there is a Panganiban Street existing 10 meters-wide.

“A proposed is 20 (meters), so the 10 meters here is the one part already of the footprint of the building. According to our engineer, kana nga location sa atong building was also the location of the previous structure,” she said.

She said she knows that Panganiban Street is a local street and that the new CCMC building is encroaching on a lot that has yet to be identified.

She added that it’s not easy to fold a structure, and they will just waste the people’s money because there is something wrong with the construction.

“The decision has to be made now. Whether to continue with it nga okay lang mogamay ang kalsada,” she said.

She said that they will have to decide today (Friday) if they will issue the building permit.

She said that she also cannot allow that a government project will violate the law.

“Maayo unta tag two-story or three-story kay dili ta makurat. But this is a ten-story structure,” she said.

Read Next
Some Cebu City school buildings have no permits