Art of the Modern Woman 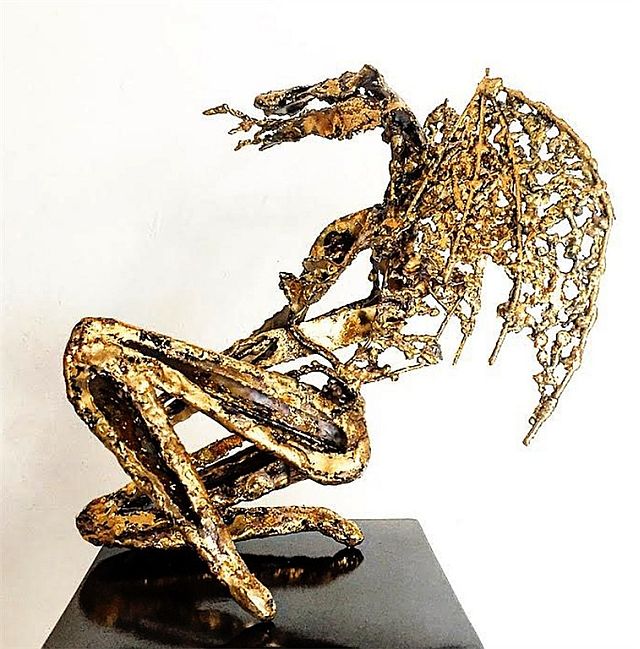 THE CONTEMPORARY life in the eyes of a woman is not often seen—but “Las Tres Marias,” the joint exhibit of the Syjuco family’s three female art protégés, brings to the forefront how they, as women, view the modern world in a style they can truly call their own.

Children of Metro Manila’s lauded artist, poet and art critic Cesare Syjuco and his wife, acclaimed installation and performance artist Jean Marie, fast-emerging artists Michelline, Beatrix and Maxine Syjuco, brought to Cebu a diverse collection of works that echo their drastically different views of the world despite being raised under the same roof.

Aptly named “Metamorphosis,” the eldest Syjuco, Michelline, a multi-awarded sculptor and accessories fashion designer, has created a five-piece collection of carefully torched and hand-beaten brass sculptures encrusted with stones. The sculptures and their gold-leaf finishes form remarkable winged creatures reminiscent of Celtic metal sculptures with a touch of surrealism.

Each appears to have been sculpted to have the poise and grace of a woman. The first piece displayed is a creature in a fetal-like position. Towards the piece in the end, the winged  creature slowly rises, almost as if it was a representation of the changing woman, how times have allowed women to break through stereotypes and stand their ground. 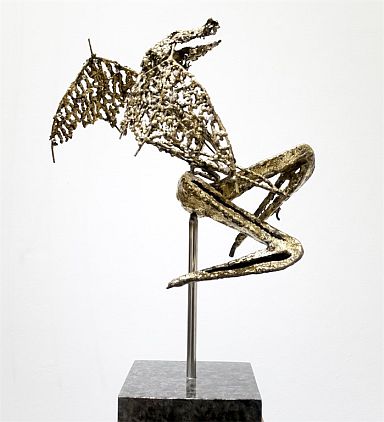 Beatrix, the second daughter, a well-known painter, video installation and performance artist, displayed seven abstract artworks under the collection “Phenomena,” which was part of her critically-acclaimed solo-exhibition in 2015, “An Unfair Vanity.”

The large-scale works are the forays of the middle Syjuco to appeal to the mystery and variety of the mind. The three-piece “Spilling Fire” series particularly stands out from the light-washed greys of the rest of her collection, with rougher textures and black splatters over the dark greys. It felt like an attack against the monotonous and mundane thoughts of the human mind, and how it now often craves for excitement and grit.

Mixed-media artist and poet Maxine Syjuco on the other hand, weaves her original poem into a 13-piece exhibit to create a visual narrative experience titled “Les Fleurs du Mal Histoire,” or “The Flowers of Evil History.” Giving the spectator a peek into Maxine’s vision of the world, the pieces are composed of faceless figures created through heavy brush strokes with varied textures. Instead of faces, bursts of white flowers and nests take their place. 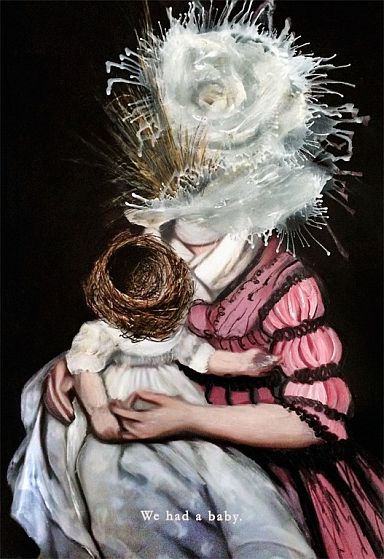 The collection owes its name to the most popular work of French poet Charles Baudelaire which is “Les Fleurs du Mal,” with her art pieces relaying the feminine decadence of Baudelaire’s Romantic era work with a touch of symbolism art.

“Las Tres Marias” is a showcase of how the modern lifestyle has not only changed the way generations of women think, but has allowed many artists to explore the merger of classical and modern art styles to create their own, which is often the beauty of postmodernist art.

After its stint at the Qube Gallery in Crossroads, Banilad, Cebu last May 17 to June 7, the exhibit moves to Manila and will be followed by one in Singapore later this year.