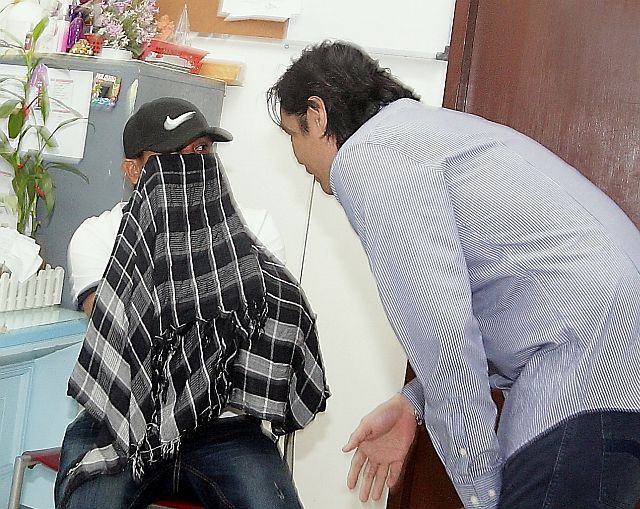 Suspected drug lord Alvaro Alvaro alias Barok covers his face as he talks to his counsel Jonah John Ungab upon arrival at the NBI regional office in Cebu City. Alvaro surrendered on Tuesday to the NBI in Bohol. (CDN PHOTO/TONEE DESPOJO)

Alvaro “Barok” Alvaro, the suspected number one drug lord in Cebu province who surrendered in Bohol Tuesday, is now the source of “vital information” of the National Bureau of Investigation as he aids the NBI in finding a trail inside the intricate and dangerous world of drug trade in the country.

What would be this information, or whether or not it would lead to the so-called protectors of drug lords in government, the NBI refused to say.

The state investigation office would not reveal anything for now, said NBI-Bohol Director Rennan Augustus Oliva in a press conference at the bureau’s regional office in Cebu City last night.

“He surrendered to help the government. As part of that, he should cooperate with us. We got information from him but they are subject to verification,” he said.

Contrary to the claims of the police, Alvaro was not with Central Visayas’ top drug personality, Jeffrey “Jaguar” Diaz, when the latter was killed by operatives of the Regional Intelligence Division of the Central Visayas Police Regional Office (PRO 7) in Las Piñas City on June 17.

NBI-Bohol Executive Officer Archie Albao said Alvaro told them that he was in Manila but not in Las Piñas City when the incident happened.

“He (Alvaro) said he was in Manila at that time but they were not together with Jaguar. They were in different locations. After Jaguar was killed, he came over, passing Bohol. And while passing Bohol, he decided to surrender instead of getting killed,” Albao said.

Oliva said they were not concerned about whether or not Alvaro was present when Jaguar was killed.

“We’re more concerned on what we can do against illegal drugs based on the information we got from him,” he said.

Asked if Alvaro mentioned about his “protectors” in the law enforcement and other government agencies, Oliva refused to answer, saying they were still conducting follow up investigations.

Oliva and his team escorted Alvaro to Cebu City last Tuesday evening, a few hours after he surrendered in Bohol, saying he feared for his safety and that of his family in the wake of the death of Jaguar.

Alvaro was immediately flown to Manila to help the NBI in its “follow up operations.”

“I won’t give you the specifics because it might jeopardize whatever we’re working on,” Oliva said.

Alvaro, he said, has not executed any judicial affidavit yet.

He voluntarily surrendered to the NBI operatives in Bohol four days after his self-admitted “friend” Jaguar was killed in what police said was a shootout in Las Piñas City.

According to the police, Alvaro was the subject of their operation but he managed to escape. They nonetheless killed Jaguar.

Alvaro was brought back to the NBI 7 headquarters in Cebu City past 6 p.m. yesterday as he was supposed to be brought to Danao City to be presented to court where he has a pending arrest warrant over an illegal possession of firearm case.

He covered his face with a shawl and chose not to speak with reporters upon the advice of his lawyer Jonah John Ungab.

“I’m sorry to disappoint you but my client won’t issue any statement for now,” said Ungab, who is also the vice mayor of Ronda, a southern Cebu town.

The lawyer also refused to speak in behalf of Alvaro, saying they have yet to confer with each other.

NBI 7 Special Investigator Arnel Pura yesterday returned to the Danao City trial court the warrant of arrest issued against Alvaro as part of the procedure.

Judge Jerry Dicdican of the Regional Trial Court Branch 25 in Danao City was on leave yesterday and has yet to issue an order on where Alvaro will be detained.

While waiting for the commitment order, Alvaro was locked up inside the NBI 7 stockade.

His mother was with him at the NBI 7 office yesterday evening. She refused to give a statement to the media.

Alvaro was arrested for illegal gun possession and illegal drugs. Since the illegal substance in his possession was over five grams, the case is non-bailable.

“The judge has a discretion where he (Alvaro) will be detained. I don’t think he’s safe here at the NBI stockade. Our office is not capable of handling this kind of personality,” Pura said.

“Let’s not speculate on things. What is important is we continue our campaign against illegal drugs especially that this is the primary concern of our president (Rodrigo Duterte),” he said.

Oliva said they would pursue the leads given by Alvaro to determine whether they are genuine or not.

“We just have to verify them. Nothing more, nothing less. Trabaho lang ta (Let’s just work),” he said.

The follow up operations and verification process, he said, is being done by the NBI Cebu, NBI Bohol, and the Anti-Illegal Drug Division in Manila.

Based on the report of the PRO-7, Alvaro is the number one drug personality in Cebu province.

He was based in Danao City but extended his operations in the towns of Carmen, Catmon and Sogod, said Chief Supt. Patrocinio Comendador Jr., PRO-7 director.

He also owns a beach resort in Catmon and was involved in the illegal drug trade in Manila.

Alvaro is also the primary suspect in the slay of Senior Insp. Jonas Tajanlangit, chief of police in Poro town in Camotes last April. But no case was filed against him in relation to the ambush-slay.

In an interview yesterday morning, Comendador said they were expecting Alvaro to use alibis and pretend that he was not with Jaguar moments before the latter was killed.

“But we’re pretty sure that he was there with Jaguar when our police team went after them. Just so happened that our team had to decide which (was) the bigger fish. The consensus was to get Jaguar,” he said.

“If there are any revelations, we will welcome it. I just hope these won’t be used for political ends,” he added.

As the new administration is about to start, Comendador said politicians employ influence and try to use some law enforcement units.

Meanwhile, Comendador received reports that the street price of shabu in Cebu City has doubled following the death of Jaguar.

Senior Supt. Benjamin Santos Jr., Cebu City Police Office director, said the supply of illegal drugs might have been affected after the death of Jaguar.

There’s also an information regarding an internal conflict between members of Jaguar’s group.

“There’s scarcity of shabu in the city because the supply has dwindled. That’s just temporary. We expect somebody to take over the place of Jaguar,” he said.

He’s nonetheless happy that Alvaro surrendered to the NBI.

“That crippled that drug operations in Cebu. But there will be no let up in our campaign,” he said./with USJ-R Intern Dafne Wenceslao