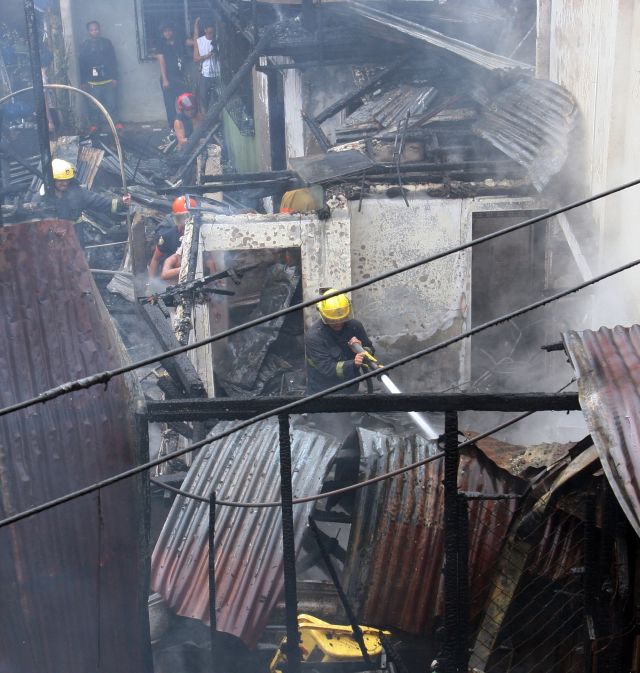 A widow died while six houses got burned down by a fire that hit Barangay Nug-as, Alcoy town at past 10 p.m. last Sunday.

PO2 Rosendo Benondo of the Alcoy police precinct said their town had no fire trucks and they had to call the neighboring towns for help.

The victim, identified as 74-year-old Rosalia Gomez, died after being trapped inside her house which was one of six that was destroyed by the fire.

Two fire trucks from Dalaguete and Boljoon towns responded to the call for assistance.

Damages were pegged at half a million pesos since the houses owned by Gomez, Melody Meranda, Cresencia Eñego, Felux Coronel, Merlina Mejares and Veneranda Camporedondo were made of light materials.

In Sitio Bugnay Uno, Barangay Labangon in Cebu City, four houses were destroyed while three were damaged by a fire that hit the area at past 9 a.m. yesterday.

Senior Fire Officer Jovito Abelgas said the damages were pegged at P200,000. Four of the houses that were destroyed were made of light materials.

A fire wall prevented the fire from spreading. The fire was put out at 11 a.m. Abelgas said 10 fire trucks were sent to put out the fire which originated from the home of Concepcion “Shawny” de los Reyes.

He said they will verify reports that a cell phone that overloaded after it was left to recharge overnight caused the fire.

Electrical misuse was cited as the cause of the fire and damages were pegged at P50,000.

Read Next
Experts determining worth of damage on Monad Shoal