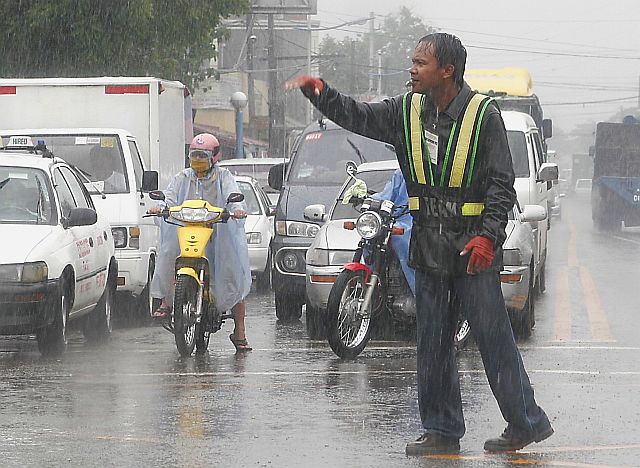 Regardless of the weather, traffic enforcers in Mandaue City, like this one detailed at Plaridel corner Ouano Street, still continue to perform their jobs. (CDN FILE PHOTO)

DESPITE the downpour, traffic enforcer Francisco Nodado Jr. still managed to help a passenger jeepney that got stranded near a mall due to floodwater last Friday.

A photo of Nadodo helping a jeepney went viral after netizen Ian Pagobo posted it on his Facebook account.

Nodado said he braved the downpour because he didn’t want the junction box to be clogged with vehicles.

“Based on my experience once the junction box is clogged, the traffic will be severely affected,” he said.

Nodado had to work overtime to continue manning the traffic.

He has been working with the Traffic Enforcement Agency of Mandaue (TEAM) for one year now and is assigned at Ouano Avenue, Parkmall area.

A native of Dumaguete City, Nodado’s family lived in Liloan town but had to transfer to Mandaue City since his son is studying in Cebu City.

He said he learned about the photo after being told by a colleague.

Last Sunday, Mandaue City Mayor Luigi Quisumbing gave him a citation and a cash reward as a token of the city’s gratitude.