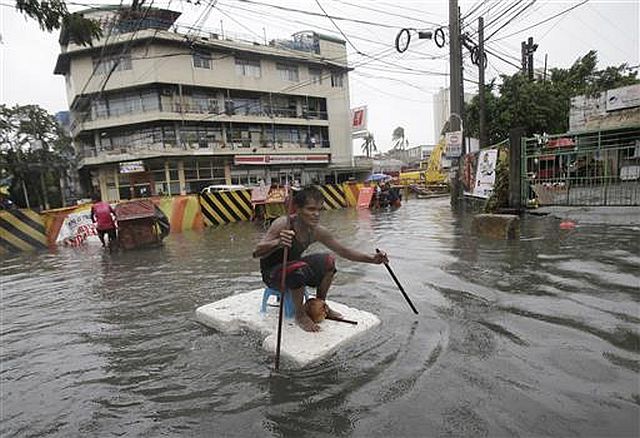 A man uses sticks to move a styrofoam block he is riding along a flooded road in suburban Mandaluyong, east of Manila. /AP

Even as typhoon “Butchoy” (international name: Nepartak) had already left the Philippine Area of Responsibility (PAR), the state weather bureau on Saturday morning raised rainfall warning in Metro Manila and several provinces in Central Luzon due to rains brought by the southwest monsoon (Habagat).

In its 12 noon advisory, the Philippine Atmospheric, Geophysical and Astronomical Services Administration (Pagasa) raised an orange warning over Zambales and Bataan, where flooding is threatening.

Flooding is also possible in low-lying areas in Nueva Ecija, Bulacan, Tarlac, and Pampanga, where yellow warning was raised.

Pagasa said light to moderate rains with occasional heavy rains are expected over Metro Manila and Rizal within the next three hours.

Pagasa earlier said weather in Metro Manila would improve by Sunday night or Monday, while the whole country would have better weather by Monday or Tuesday.