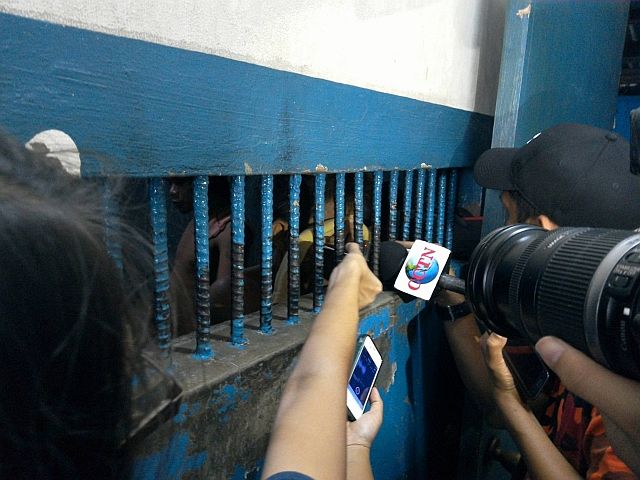 Ramil Berden answers questions from the media from inside his cell in Mabolo Police Station. He said he tried to escape because he wanted to go home to his family who depends on him. (CDN PHOTO/RABBONI BORBON)

Two detainees of Mabolo Police Station escaped but was recaptured after a hot-pursuit on Wednesday morning.

Ramil Berden and Jaymark Rosario were recaptured in Lapu-Lapu City at 6 a.m. Wednesday after they managed to escape from their detention cell at dawn through a hole they made on the plywood ceiling of their cell.

Berden, who is from North Cotabato, said he tried to escape because he wanted to go back home to his family who depends on him.

Berden said he regretted doing the act and has asked forgiveness from the police.

Mabolo police chief Senior Insp. Homobuno Sayon said they will investigate on whether the police personnel on guard neglected their duties leading to the escape of the detainees.

Berden was arrested for violation of RA 9165 or the Dangerous Drugs Act while Rosario, who is from Lapu-Lapu City, was nabbed for qualified theft./UP Cebu Intern PatrickByron Gattoc and USJ-R Intern Rabboni Borbon

Read Next
Ten minors rounded up in Toledo City