Mother of two dies, 3 others hurt in Lapu-Lapu collision 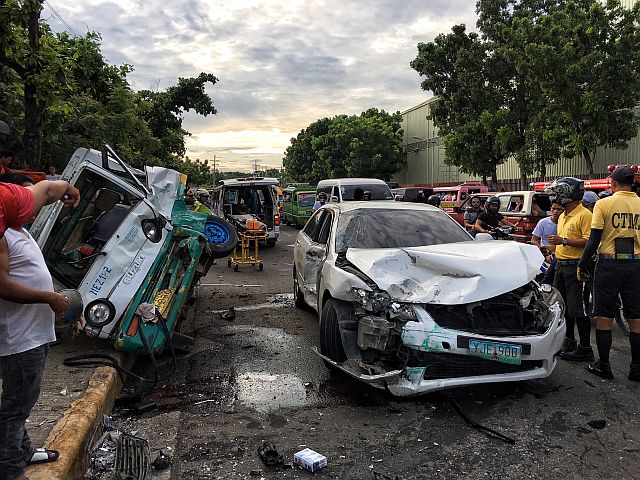 A badly mangled Toyota Camry settles in the middle of the street after colliding with a multicab and a motorcycle in Barangay Ibo, Lapu-Lapu City on Saturday morning. (CDN PHOTO/TONEE DESPOJO)

A THREE-way vehicle collision during an early morning rush hour claimed the life of a mother and injured three others in Lapu-Lapu City yesterday.

A speeding Camry driven by an 18-year-old student pilot collided head on with a multicab passenger jeepney and a motorcycle as it veered toward the left lane in counter-flow direction at the Barangay Ibo highway in Lapu-Lapu City.

The motorcycle driver, eatery owner, Maria Barretto, 42, who was heading to her food stall, was thrown off ten meters away and died on the spot from multiple head and body injuries. Her passenger, eatery worker Rosana Daban, 20, was seriously injured.

The multicab driver, Jemie Ortega and his passenger Cerenia de Lota were also injured. They were all brought to the Vicente Sotto Memorial Medical Center.

Barretto had two teenaged children, aged 18 and 14. She ran a carenderia in Sitio Seawage in Barangay Pusok where she was headed that morning with her helper, Rosana Daban.

Her husband is an Overseas Filipino Worker in Singapore.

Traffic Investigator PO2 Jomar Florentino said the Camry driven by Macasocol was at full speed coming from Pusok and heading towards Barangay Ibo when it swerved to the opposite lane at a curve on the road fronting the East Asia Utilities.

He collided head on with the multicab passenger jeepney driven by Ortega.

Barretto, who was driving a Kimko motorcycle scooter, coming from Barangay Ibo heading for Barangay Pusok was slightly behind the multicab’s left side and was also hit by the Camry’s right front door.

Interviewed by Cebu Daily News, Macasocol said he could not remember how we had swerved to the opposite lane. He denied being drunk or had fallen asleep saying he was scheduled to fly that morning.

He called for his lawyer Briccio Boholst to try to get a settlement with the victims. He said he hoped this could will be settled between them and the victim’s relatives as they are willing to shoulder all the financial needs of the victims.

Macasocol is a student pilot of Airworks Flying School located at the General Aviation Road .