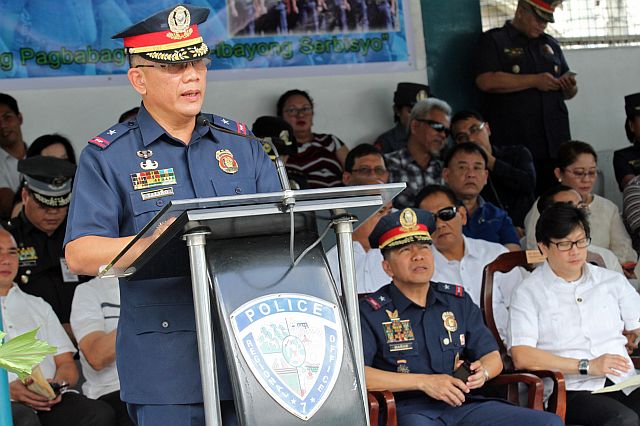 Taliño: No letup in anti-drug drive

“Illegal drugs is the mother of all crimes. All others — robbery, theft, rape, and the like — emanate from illegal drugs. If we get rid of drugs, then all other crimes will surely decrease,” said Chief Supt. Noli Taliño, PRO-7 director.

Based on PRO-7’s records, the total crime volume in Central Visayas or Region 7 went down from 31,482 to 29,302 or a decline of 6.9 percent compared to the same period last year.

Not one case solved

But from July 1 to August 21, 69 suspected drug pushers were killed in police operations in Central Visayas, while 76 others were gunned down by still unidentified assailants.

Taliño said he’s expecting cases of murder to rise in the next months due to the killings of drug suspects.

Of the 76 suspected cases of vigilante-style attacks, not one was solved by the police nor was a single perpetrator identified.

“Investigations conducted by the local chiefs of police are still ongoing,” Taliño said.

The regional Commission on Human Rights (CHR-7) is looking into all cases of alleged extrajudicial killings in the region.

“That’s the mandate of CHR. But I want to emphasize that drug pushers neutralized by policemen were killed in legitimate operations, that is they placed the lives of our operatives in danger. Extrajudicial killing is another thing. I don’t condone any vigilante-style attacks. That is against the law,” Taliño said.

Since July 1, PRO-7 conducted 751 anti-illegal drugs operations that resulted to the arrest of 1,130 persons, and 1,295 cases filed in court.

About 2,272 grams of shabu were confiscated with a value of P26.5 million.

Some 66,018 drug users and 5,105 drug pushers surrendered to police precincts in the region at the onset of Oplan TokHang or Toktok Hangyo in which police ask drug suspects to surrender and sign documents renouncing their former life as users or dealers.

The number of surrenderers is way higher than the 8,000 who are in the drug watch list of PRO-7.

“I’m surprised with the turnout of surrenderers. But that just means people know who and what they are. They know themselves better than the police do,” Taliño said.

Taliño said they are preparing for another round of Oplan TokHang.

But this time, PRO-7 will target drug users and pushers who live in condominiums and subdivisions.

“No one is exempted in our campaign against illegal drugs. We don’t target just one sector but all,” he said.

So far, Taliño said PRO-7 has received donations worth P1.1 million from different entities for their anti-illegal drugs campaign.

He said he will give P10,000 to a policeman or unit who can neutralize drug personalities.

Taliño refused to reveal the identities of those who donated the money for security purposes.

Despite what he considered as “successful” anti-illegal drug operations, Taliño said there will be no let up in their campaign.

“Change is not anymore coming but is well within our grasp. At this early, I can foresee a very positive outcome come December, six months since we started the relentless campaign against illegal drugs,” Taliño said in his speech during the 115th anniversary of the Philippine National Police yesterday.

“The challenge continues to come. We face the daunting task to ensure the safety and security of every Filipino,” he said.

“Although a number of people criticized what we are doing, let us just carry on as long as we know that what we’re doing is within the confines of the law and respect to human rights,” dela Rosa said.

Dela Rosa was at the Senate yesterday to attend the hearing on the drug-related killings.

The PNP chief reiterated his call to all policemen to stay away from illegal drugs and instead help the government end the drug menace.
Community issue

For his part Arvin Odron, acting CHR-7 director, said the PNP should not be satisfied with the reports of decreasing crime rate in the region when extrajudicial killings are on the rise.

Odron said he can’t help but ask the PNP why the number of extrajudicial killing cases is rising every day.

“What is their intelligence unit doing?” he said.

Leo Villarino, CHR-7 chief investigator, said based on their records as of Friday last week, there are at least 150 cases now of drug-related arrests and killings in Cebu province alone.

But CHR-7 has yet to come up with a specific list on how many of the drug-related killings were a result of buy-bust operations or were carried out by vigilantes.

“The fight against criminality and illegal drugs is no longer just a concern of the government but an issue that the community and all sectors must aggressively partake,” Odron said.

The first suspect identified as 38-year-old Leo Yap of Sitio Urel, Barangay Banilad was walking along the road in the area when he was shot thrice by motorcycle-riding gunmen at midnight Monday.

At Pancencia Street, Barangay Tipolo, 28-year-old pedicab driver identified as Joseph Voltaire Vocsles was shot down by motorcycle riders while waiting for passengers.

In Minglanilla town, a 43-years-old suspected drug pusher was shot down by motorcycle-riding assailants right after he visited his detained common law partner at the police precinct last Sunday afternoon.

Engbino dropped by a store to buy some liquor when the assailants arrived and one of them shot him twice on the head.

Dacua said they have yet to verify if Engbino is on their drug watch list.