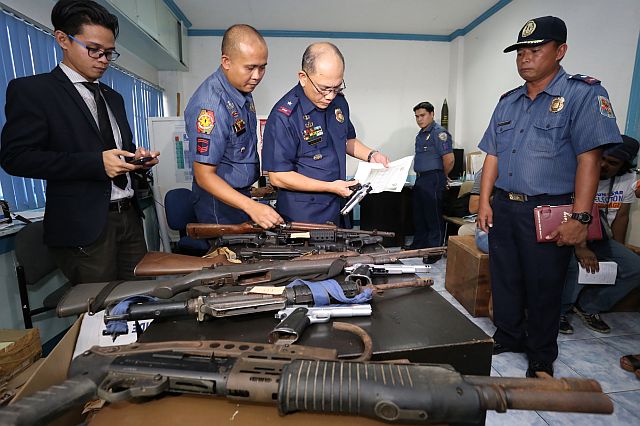 Former police general and now Daanbantayan Mayor Vicente Loot turned over to the local police 12 of his 14 firearms after their licenses were revoked by the Department of Interior and Local Government (DILG).

Loot said he cannot locate his two other guns, a .38 super pistol and one .40 pistol.
Chief Insp. Petronilo Gracia, Daanbantayan police chief, went to Loot’s home in Daanbantayan to claim the firearms that were placed on a wooden box at 11 a.m. yesterday.

Among the firearms Loot surrendered were six pistols, four high-powered rifles, one rifle and one shotgun.

Accompanied by some policemen from Daanbantayan, Gracia turned over the firearms to the Police Regional Office’s (PRO-7) Firearms Explosives Security Service Agency and Guards Supervisory Section (FESSAGS) in Cebu City.

They arrived at the FESSAGS office at past 5 p.m. and immediately conducted an inventory of the firearms in the presence of Chief Supt. Noli Taliño, PRO-7 director.
Taliño said Loot must look for the two missing firearms and turn them over immediately to PRO-7.

“If he (Loot) won’t be able to find them, he might as well submit a report why these guns are missing, and then PRO-7 will conduct an investigation (to validate his claims),” he told reporters.

The 12 firearms which Loot surrendered shall remain with FESSAGS for safekeeping.
Loot’s lawyer Russel Pernites said they were still looking for Loot’s two missing firearms.

While the notice to cancel Loot’s permit to own guns is not yet final, Pernites said they immediately complied with the order and turned over the firearms which they found.
“We will ask DILG to reconsider its decision. We’re currently drafting our motion for reconsideration,” said Pernites who represented Loot at PRO-7.

He said Loot was unable to travel to Cebu City yesterday because he was busy attending to preparations for the Haladaya Festival in time for Daanbantayan’s fiesta on Aug. 30.
Pernites said Loot intended to hire the services of a private security agency to protect him.

“There are rumors and even Facebook posts and comments that appear to be threats on the mayor’s life. We can’t disregard these things, either these are confirmed or not, verified or unverified, true or not,” he said.

Early this month, the National Police Commission (Napolcom) also removed Loot’s authority over the police in his town.

Loot was named by President Rodrigo Duterte as one of five generals allegedly involved in illegal drugs.