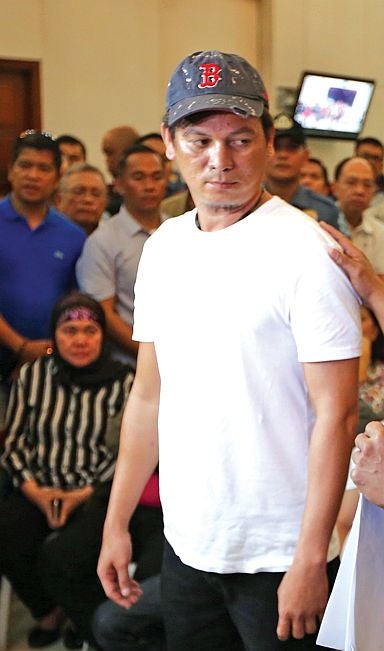 Confessed Cebuano drug lord Franz Salabones has named at least 18 police officers, including three police colonels assigned for a long time in Cebu, who had allegedly been receiving protection money from him or engaged in the drug trade themselves.

Salabones, who has been in the custody of the Philippine National Police (PNP) in Camp Crame since he surrendered on Aug. 7, has apparently given the PNP details on his earlier claim that there were policemen on the take, including an officer whom he was allegedly paying P200,000 a week.

“We are still validating their level of involvement. But obviously they are involved in drugs trade,” Chief Supt. Leo Angelo Leuterio, Internal Affairs Service (IAS) Deputy Inspector General, was quoted as saying in a report published yesterday on the news portal of UNTV.

Franz, a native of San Fernando town in southern Cebu, is the brother of the town’s vice mayor, Fralz Sabalones. It was the vice mayor who was earlier implicated in the illegal drugs trade until Franz came forward and surrendered directly to PNP Director General Ronald “Bato” dela Rosa.

Leuterio revealed that the 18 policemen were identified from the drug matrix provided by Salabones, considered the number two drug personality in Cebu who had admitted to having taken over the operation of Jeffrey “Jaguar” Diaz after the latter was killed by Cebu-based policemen in Las Piñas City last June 17.

Aside from the police officers, the drug matrix also included one agent of the Philippine Drug Enforcement Agency (PDEA), who received protection money ranging from P1,000 to P150,000 a week, according to the report from UNTV, which was able to secure the copy of the matrix.

Sabalones reportedly budgeted P507,000 as weekly payola or protection money to these police officers and the PDEA agent.

The payola was delivered to the policemen and the anti-drug agent through Sabalones’ cook, colleagues in the gym, billiard buddies, and neighbors who served as his bagmen.

Derilo and Ylanan were among the five police officials from Cebu who were transferred to Mindanao, Cordillera and Cagayan Valley last July after the assumption of office of the new administration. It was not clear where Manatad is assigned now.

Based on the matrix, Ylanan was allegedly receiving payola through Sabalones’ co-billiard player surnamed Ababon who would hand the money to a lower ranking policeman, identified as P03 Roderick Ybañez, who would in turn give it to Ylanan.

Another policeman allegedly receiving protection money from Ababon was SP02 Oneil Nabua, whose name was already included in the list of narco policemen earlier announced by President Rodrigo Duterte.

The name Manatad was, meanwhile, placed under the names of couple P01 Dave Agcol and P02 Maria Genevieve Agcol, whose names were placed directly under the name of Sabalones.

Dave Agcol, a former policeman, was killed in a police operation last August 3 in Naga City in southern Cebu. His wife was later arrested and has remained detained on drug-related charges.

Another name in the matrix was P01 Percival Eborlas who was allegedly receiving a weekly payola of P1,000.

Eborlas was among the seven policemen from Cebu City Police Office’s (CCPO) intelligence branch who were investigated last February for allegedly releasing two suspected drug personalities in exchange for P150,000.

Also in list of Sabalones was PDEA-Cebu agent Joel Bersales, whose name was placed under a bagman named Neil Abella, who was identified in the matrix as a colleague of Sabalones in the gym.

Leuterio, in the UNTV report, was quoted as saying that they would be filing cases against those named in the matrix once their participation were proven.

He said that by this week, he would recommend that Camp Crame issue an order that would remove the 18 police officers from their places of
assignments and place them in the PNP Holding and Administrative Unit.

Criminal Investigation and Detection Group (CIDG) director Chief Supt. Roel Obusan was also quoted in the UNTV report as saying that they had sent notices to the policemen mentioned in the matrix so they could issue their respective counter affidavits.

When reached for comment last night, Derilo said he was shocked that he was included in the alleged drug matrix of Sabalones.

In a brief interview and text message, Derilo vehemently denied that he was receiving payola from Sabalones.

He said Sabalones was even their next target after Jaguar died. It was the team led by Derilo and Ylanan who killed Jaguar Diaz in a shootout in the capital.

“Do you think ako nang buhaton? Ako ra’y nakabugha sa pinaka-ulo nila, silay isunod nako (Why would I do that? I was the only one who was able to cut off the head of their leader and he was next.) The only way that they can pin me down is to implicate me. Ang pinakadaghan nga natumba nga grupo… mga tawo ni Franz. Do you think mangayo pa ko og payola? Mohatag kaha sila sa akoa? Ila nalang nang ibayad sa gunman para ipapatay sa akoa kaysa maghatag pa sila sa akoa. (Most of the people we had taken down were men of Franz. Do you think I will ask payola from them. They would rather pay a gun for hire to kill me instead of paying me money),” Derilo said in an interview.

Derilo initially asked that he be given time to confer first with a lawyer before he would grant an interview but he later decided to make a statement instead.

Derilo, who has since been assigned to the Zamboanga Peninsula, admitted he was already in Manila last night as he was due to report to Camp Crame today.

Derilo said it was the CIDG in Central Visayas that issued memorandum or directive for him to report to Camp Crame and not the Internal Affairs Service.

Aside from the phone interview, Derilo sent two text messages last night to deny the accusations.

In his first text message, Derilo reiterated his appeal to give him time to consult his lawyers and his senior officers.

“Maulawan lang ako pamilya (This will embarrassed my family). Anti-drugs is my advocacy. Do you think I will do such a thing, to cuddle (sic) with illegal drugs? During my stint as R2, I did arrested (sic) and neutralized significant number of drug personalities. Most of them, under Franz,” Derilo said in a text message.

Derilo, in the same text message, lamented being subjected to unfounded charges despite being committed and dedicated to his job, of having risked his own life and even having to sacrifice the time he should have been spending with his family for the sake of police work.

“I can’t afford to destroy my reputation and respect I established for serving the people of Central Visayas for 18 years. Because of my commitment and dedication to my job, there were lots of instances that I would have to sacrifice spending time with my family. And this is what I get. I had been hands-on sa trabaho and even engaged in risky situation bisan acting chief RID nako,” he added in his text.

In his second text message, Derilo asked the public to believe that there are honest and committed policemen who have been fighting against illegal drugs.

“People has to realize and recognize the fact that even during the time when administrations do not have the balls to seriously back up anti-drugs campaign, there were already some policemen who, with all integrity, were just weren’t scared and fought influential drug lords grit for grit. With the new President, my group was one of these policemen who were just so glad and became more emboldened,” Derilo said in his second text he sent past 8 p.m.

Derilo said that after he and his team had taken down Jaguar, they were already hot on the trail of Sabalones in Mindanao but they lost him.

The police officer believed that drug syndicates were using their resources to discredit him.

Asked what was his reaction when he learned about Sabalones’ matrix, he said: “Sobra pa sa nakugang. Naulawan akong pamilya. Kamo ra’y malingaw ana sa media (I was beyond shocked. It shamed my family. It’s only you in the media who are having a field day),” he added.

Read Next
One of Oyao brothers shot dead inside store