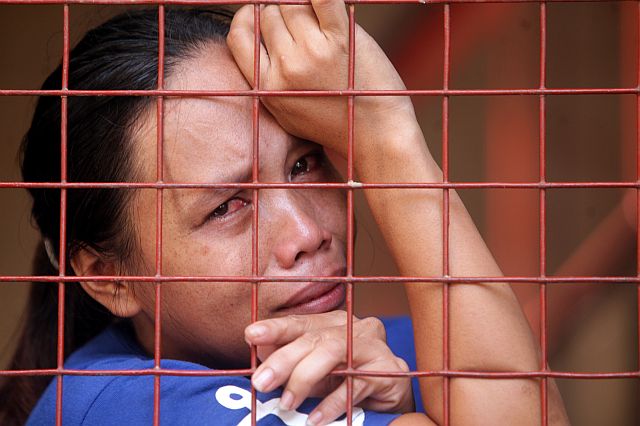 Kimberly Llorag, 27, the grief-stricken mother of the two children who perished in the fire (CDN PHOTO/TONEE DESPOJO).

Marvin Llorag, 46, was having his noontime siesta at their home in Barangay Talamban, Cebu City when he heard screams from neighbors.

He woke up to thick smoke and raging fires inside their house in Sitio Hillside.

But aside from the frantic calls for help coming from his neighbors, the sounds that most struck Marvin were the cries of his two grandsons — Terence John Garcia, 3, and Bryle Cedric Llorag, 2 months old — who were left by themselves in the second floor of their house located just beside Marvin’s own home.

(The fire was already very big. I heard the cries of the children. I wondered why they were crying. After a while, the crying just stopped. Perhaps, they were already eaten by the fire.)

Marvin said he rushed to the children’s house and tried to throw water into the fire, but it was too strong and he couldn’t get inside the house anymore.

Kimberly Llorag, 27, the mother of Terence and Bryle, is Marvin’s niece. She was away working as a househelp in Barangay Banilad when the incident happened.

In the two-story house where the boys were trapped, their uncle Ryan Llorag, who lived with them, was also having a nap on the ground floor of their house when the fire started.

(When I opened the door of my room, the smoke was already very thick. I attempted to go upstairs but it was impossible. The fire was already on the door of the boys’ room. If my cousins weren’t shouting, I might also have died in the fire.)

Records from the city’s Bureau of Fire Protection (BFP) showed that it received the fire alarm at 11:58 a.m. yesterday.

Chief Insp. Rogelio Bongabong Jr., the Cebu City Fire Marshal, said they had to raise the fire status to Task Force Alpha, which meant firetrucks from nearby towns and cities had to help, since some of BFP Cebu City’s firetrucks were still responding to two other fires earlier in the day.

At least 15 houses were destroyed by the fire, based on BFP initial reports. Bongabong pegged the damage at P300,000. The fire was declared under control at 12:24 p.m.

Yesterday’s incident was the 363rd fire to hit Cebu City and province since January this year, damaging some P36 million worth of properties, record from the BFP in Central Visayas showed.

The death of the two children brought to 26 the number of persons who died in these fire incidents, with Bryle being the youngest victim.

Based on their initial investigation, Bongabong said the fire started in the room of Terence and Bryle, whose charred bodies were later on found by fire responders among the debris of their burned home.

Bongabong said they suspected the fire started from the ceiling fan in the boys’ room.

The boys’ devastated mother arrived as the fire still raged. But she couldn’t do anything more than watch the firefighters try to put out the fire and recover the bodies of her two youngest children.

Kimberly said she was at work when she received a call from a neighbor informing her about the fire in their are. She works as a house help in the home of a Korean family in Barangay Banilad in Cebu City.

(Bryle was sleeping. The two of them were upstairs. Their uncle was downstairs. Terence would usually just call for his uncle when Bryle, the younger one, would cry. I don’t know what do next.)

Terence was to celebrate his fourth birthday next week, on October 5.

Kimberly recalled that yesterday morning, before she left for work, Terence told her that he wanted to have pizza for his birthday.

The mother also said that the last time she held her youngest son in her hands was early morning yesterday when they went to the barangay health center to have Bryle immunized.

Kimberly has five children and has separated from her husband, which was the reason why Bryle was carrying her maiden name and not Garcia. One of her older kids lives with a relative while the two others were in school during yesterday’s fire.

Kimberly’s mother would usually look after Terence and Bryle but yesterday, when the fire happened, she had gone to the barangay’s elementary school to fetch one of Kimberly’s children whose class was about to end at noon.

The affected area was an interior sitio (sub-village), which also restricted the movement of the responding firetrucks since it could not get inside the site.

Firefighters had to connect four hoses, measuring at least about a hundred meters, in order to reach the interior area where the fire was raging.

Bongabong also pointed out that the houses — some made of light materials and others of concrete, were to close to each other, that it became a fire hazard.

Cebu City’s Department of Social Welfare and Services (DSWS) said a total of 27 houses were affected by the fire — 24 were destroyed while three were damaged.

The DSWS records also showed that around 200 individuals from 40 families were displaced by the fire although the numbers will still be finalized by today.

City Hall’s Division for the Welfare of the Urban Poor (DWUP) was also scheduled to inspect the affected area today mainly to identify if the affected lot is a private property or owned by the city government, said DWUP’s newly appointed chief, Genevieve Alcoseba.

“We still have to verify. If it’s city-owned and there are no existing interior roads in the area, the city has to re-block it so that it won’t happen again,” she said.

If the lot is privately owned, Alcoseba said they would need to check first with the owners and consider their decisions before doing anything in the area.

The fire victims chose to stay in makeshift tents just near the fire site in order to look after their belongings.

Barangay officials of Talamban provided them with tents and sleeping materials.

The barangay council of Talamban held an emergency session yesterday afternoon where they declared Sitio Hillside under a state of calamity.

Based on the barangay’s officials Facebook page, they have allocated an initial amount of P200,000 for basic necessities and financial assistance for the fire victims.
An additional financial assistance will also be given to the family of the two boys who died in the fire.

Barangay officials are asking for donations like clothes, blankets, canned goods, noodles and other basic needs for the fire victims.

Meanwhile, a stockroom of an electronics store in Barangay Punta Princesa, Cebu City caught fire past 8 a.m. on Wednesday. No one was hurt in the incident.

“We’re still investigating the cause of the fire,” he said.

The Cebu City Fire Department received the alarm at 8:25 a.m.

The fire was declared under control at 8:51 a.m.

Read Next
Blessed Virgin Mary statue in Simala to be brought to IEC Pavillon, Basilica