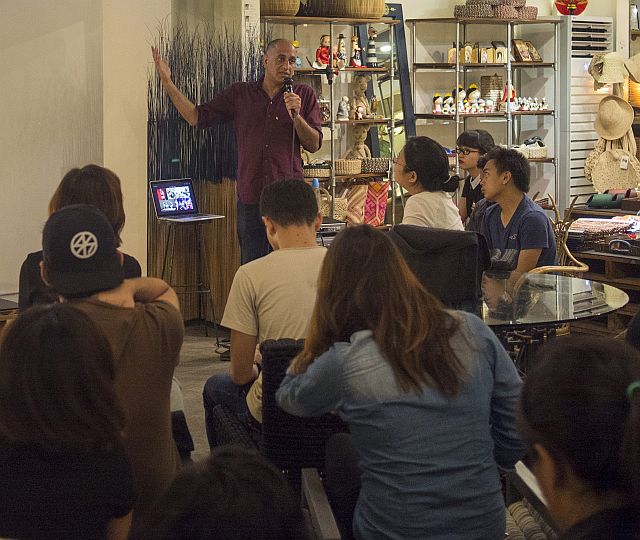 Zayd Minty shares how Cape Town’s creative community made the city a creative capital of South Africa during a forum in Cebu City (CDN PHOTO/CHRISTIAN MANINGO).

THE creative sectors and the government are the very propagators of a community’s arts and culture. As such, both have to maintain a strong collaboration and work together in making arts and culture become an asset that can fuel the economy and the tourism sector.

This was the call of Cebuano artists, entrepreneurs and local and international professionals involved in the arts and culture who joined last Friday’s third leg of the Creative Juice Talks at the Holistic Coalition for the Willing (HoliCoW) Gallery-Store at Crossroads Mall, Banilad.

“Gathering of artists like this is important most especially if you intend to talk about your unified aspirations in building a community of arts and culture here in Cebu,” said Zayd Minty, who was the speaker of the event, which was a gathering of creative professionals who were looking for ways to spur the sector and contribute to the province’s economy. Creative Juice series is spearheaded by Create Cebu, Department of Trade and Industry (DTI) 7, HoliCoW, and Binisaya.

“It is important for you, artists, to closely collaborate with your government. You must identify which agencies or sectors will be instrumental in making your projects and initiatives into a reality,” Minty said.

He said that cooperating with the government in conducting a creative mapping in the province as well as identifying the right creative sector that could augment Cebu’s economy would also be an avenue that the artists could explore.

Minty also shared how his small country, which used to be plagued with chaos, poverty and slavery, attained a growing creative capital with the efforts of its dynamic and eager community of artists.

“As had been done in our country, we were able to put Cape Town in the map of arts and culture by building relationships with like-minded artists. We worked out on discovering the local distinctiveness of our country and how we can exhibit our uniqueness through the kind of art that we do,” Minty said.
Local artists also raised the challenge of getting financial support from the government and the problem of who to reach out to for assistance.

A representative from DTI said they had been giving support to the creative industry in Cebu, but their actions had been limited because of the thrusts and marching orders given by their superiors.

“We have a lot of marching orders to focus on, although we are trying to work around the limits. Much as we try to submit projects and proposals to the decision makers, we are hindered by guidelines that are so terrible,” the representative said.

The representative said that they had been partnering with artists in meet-ups and projects the DTI organized from time to time to help people appreciate the value of the creative industry in contributing to Cebu’s economy and the tourism industry.

Read Next
Cebu LGUs urged to develop, help MSMEs in their areas