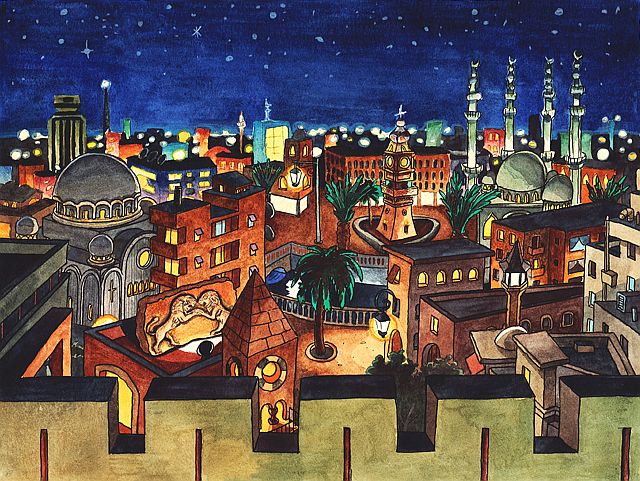 The image ‘Aleppo Night’ provided by Jan Egesborg on Oct. 13, 2016 is part of a ‘poetic’ protest to draw attention to the ongoing violence in the Syrian city of Aleppo. /AP

ALEPPO, Syria — A “humanitarian pause” took effect Thursday in the Syrian army’s Russian-backed assault on rebel-held areas of Aleppo, but it was quickly tested by fighting on a corridor opened for civilians to flee.

The army said it was opening eight corridors to provide safe passage for those leaving, but the unilateral ceasefire suffered an early blow when clashes broke out at one of them, an AFP correspondent said.

Artillery exchanges erupted around the crossing point on the front line in the city center, the photographer said. The state SANA news agency blamed “terrorist groups.”

More than 250,000 civilians have been trapped in the rebel-held east of the city under near-continuous siege since mid-July and under devastating bombardment by Russian and Syrian government aircraft which only halted on Tuesday.

Russia has said the pause in a Syrian army offensive launched on September 22 will continue until at least 1600 GMT and could be extended. The Syrian army has said it will last three days.

The Syrian army has said it is opening eight corridors for civilians to leave, two of which can also be used by rebel fighters provided they leave behind their weapons.

Residents interviewed by AFP said they were eager to leave but wanted more reassurance they would be safe./AFP

Read Next
Poe seeks Senate probe of the US embassy dispersal