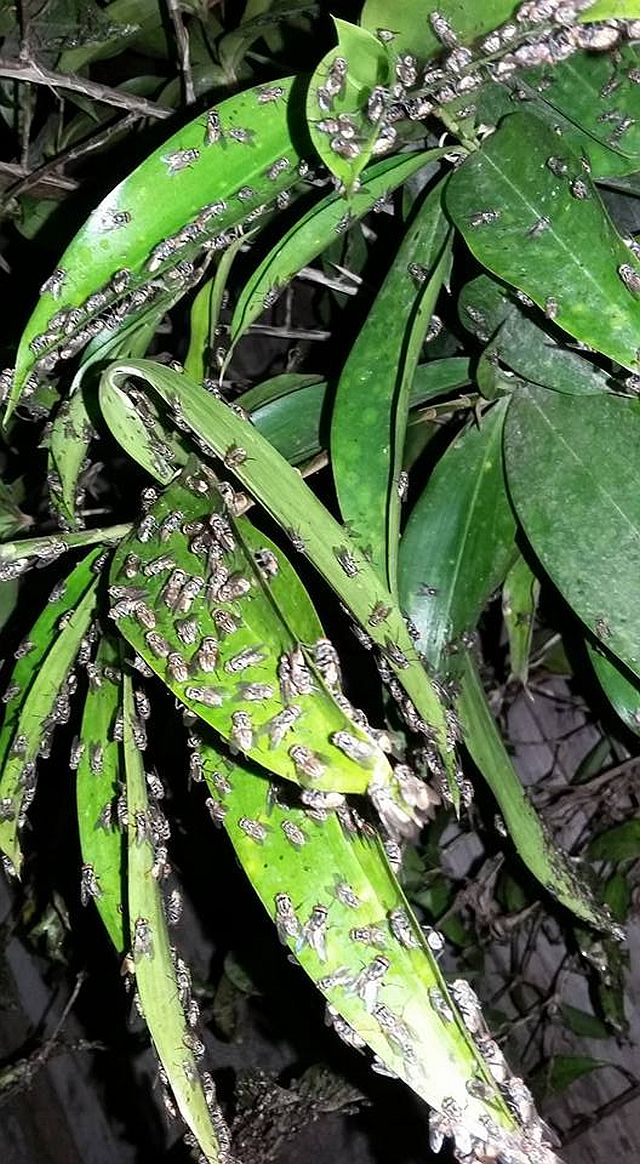 Hundreds of flies are seen on the leaves of a plant in Asturias town in this Facebook photo taken during the February 2016 fly infestation (Fcebook/Josephine Comedia).

THE Provincial Health Office (PHO) is encouraging the residents of Asturias town in northern Cebu to put mosquito nets or screens on their windows and doors to prevent the flies found in their area from entering their houses.

Dr. Rene Catan, PHO head, gave this advice even as Cebu Gov. Hilario Davide III ordered the Provincial Environment and Natural Resources Office (Penro) to verify reports from barangay officials of the town about the fly infestation in the area.

Davide said that there are three poultry farms in the town which could be the sources of the flies.

Catan also said that the office had already sent a misting team to kill the flies and stop the fly infestation in the town.

Catan said that according to the reports he received from his team, the volume of flies in the area is “abnormal.”

Catan said that this abnormality of volume of flies in the area could put the residents in danger.

He said that there are lots of diseases that a human can get from fly like typhoid fever, for instance.

In February this year, a photo of an unusually large number of flies resting on plants reportedly taken from Barangay Manguiao, Asturias town, which was uploaded on Facebook and had gone viral, was noticed by local officials there.

In 2014, residents had also complained of fly infestations in the town caused by the poultry farms there.

Davide said he would wait for the Penro recommendation if he would give a closure order or not on the poultry farms if these would be found out as the cause of the fly infestation.

However, Davide said the town officials should also take care of the problem.

Catan, for his part, said he would meet next week with the complainants, owner of the poultry, Penro and the Department of Environment and Natural resources (DENR) 7 to discuss the situation and create a solution to the problem.