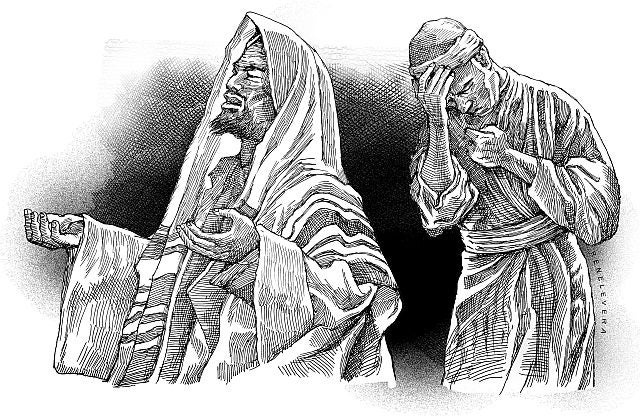 In 1885, the French painter Jacques Joseph Tissot, who changed his first name to James, experienced a reawakening of his Catholic faith. His mother, Marie Durand, herself a Catholic, had made sure that he would grow up in Nantes, France, a devout person. Somehow, during his training as artist in Paris, and the years of success in London as a genre painter, portraying fashionable women, James Tissot lost track of religion. His spiritual return coincided with the French Catholic revival, a popular reaction to the secularism of the French Third Republic.

He then immersed himself in painting scenes from the Bible, for which he used watercolors.

His Le pharisien et le publicain (The Pharisee and their Publican) belongs to this stage of his artistic career. The painting takes up the parable that Jesus told, as narrated in the Gospel of Luke, who introduced the incident in these words: “Jesus addressed this parable to those who were convinced of their own righteousness and despised everyone else.”

The parable has to do with two people who went up to the temple area to pray, one a Pharisee, and the other a tax collector. Luke writes that the Pharisee “took up his position” and said this prayer “to himself”: “O God, I thank you that I am not like the rest of humanity — greedy, dishonest, adulterous — or even like this tax collector. I fast twice a week, and I pay tithes on my whole income.”

On the other hand, the tax collector “stood off at a distance” and “would not even raise his eyes to heaven.” He beat his breast and prayed: “O God, be merciful to me a sinner.”

Luke concludes his account with Jesus making this declaration: “I tell you, the latter went home justified, not the former; for whoever exalts himself will be humbled, and the one who humbles himself will be exalted.”
Tissot portrays the scene with meticulous realism. (Tissot refused the invitation of his friend Edgar Degas to join their group, the Impressionists.) He even travelled to the Middle East to ensure the authenticity of his illustrations. In the painting, the Pharisee proudly stands in full regalia; his layered garments impress us with their elegance. The fact that his parents engaged themselves in the fashion industry might have helped Tissot in the matter of clothing, in the presentation of which he so brilliantly acquitted himself in his paintings of society women in London.

In contrast, the tax collector only wears a simple costume, and only a red cap accents his presence, calling our attention to his bowed head.

Tissot powerfully conveys the contrasting attitudes of the Pharisee and the tax collector. The Gospels frequently tell of Jesus’ run-ins with the Pharisees, who insisted on the literal observance of the Mosaic Law, which Jesus frowned upon, stressing the supremacy of compassion. The tax collector or publican epitomized the sinner. The publicans implemented the Roman system of tax farming, the collection of taxes through bidders, who made a profit by collecting more than the amount they had paid as bid.

In a sermon, St. Augustine summarized the parable in this way: “[The Pharisee] went up to pray; but his prayer was not a request for anything from God, it was a glorification of himself. It was but little not to pray to God; but what do you think of his praising himself, and even despising his neighbor who did pray? And the Publican standing afar off was yet praying near to God. Conscious of his own self, he kept at a distance, while his piety drew him near to God. Though the Publican stood afar off, the Lord was at hand to hear him.”

At times, when I am in church, beggars would approach me to ask for money. Not once have I seen them sit or kneel inside the church in an attitude of prayer. But I suspect that the reason they mostly keep outside is that, in their ragged and unwashed condition, they consider themselves unworthy to mingle with the churchgoers, who might resent their presence, who may not know that in our sinfulness, we are all ragged and unwashed before the Lord.

Read Next
His usual hype or (shudder) not?