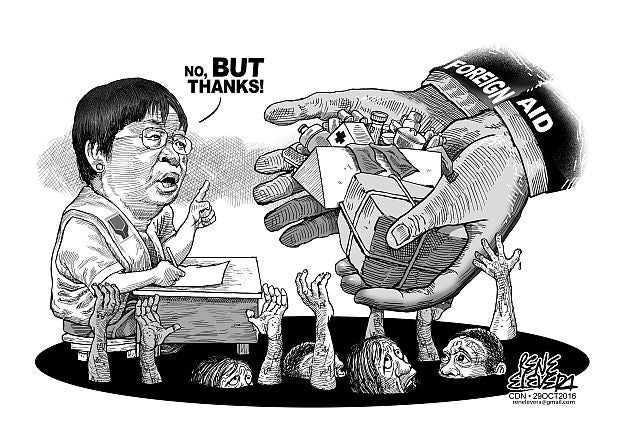 As someone who is identified with the militant Left, Social Welfare secretary Judy Taguiwalo views anything associated with the US and other Western countries that are not socialist or communist as evil and having an ulterior agenda.

Hence her statement that the country “doesn’t need donations” from these countries when it comes to dealing with the victims of typhoons “Lawin” and “Karen,” claiming that the country has enough funds to provide them their food, shelter and other assistance.

The validity of her claim remains to be seen, but Taguiwalo’s stance merely reflected that of her left-wing boss President Rodrigo Duterte, who once again lambasted the US for its persistent criticism of his war on illegal drugs but slipped in an acknowledgment when he said that any donation from the US or Western countries will “be fine.”

But we wonder if Taguiwalo’s comment about not needing foreign donations includes that of China whose cash donation to the flood victims President Duterte acknowledged before he left for his trip to Japan.

According to her, it was the failure of the Aquino administration to account for these donations and its underspending on the rehabilitation efforts that resulted in thousands of victims still without homes even if such homes are located within danger zones.

Taguiwalo can launch an inquiry into it anytime she wants, but the unaccounted foreign cash donations during the Yolanda tragedy should not cause the Duterte administration to act distrustful, self-righteous and scornful of anything given as cash aid to the country during calamities.

As a Cabinet secretary, Taguiwalo is merely reflecting the President’s mindset which had become antagonistic towards anything related to the US, the European Union and other countries that criticized his take-no-prisoners war against illegal drugs.

And if she and the President are so suspicious about whether there are strings attached to foreign calamity aid, then why don’t they ask directly the countries concerned in the first place?

It won’t be surprising if they won’t because they don’t have one iota of evidence to support their claim that these foreign donations come with strings attached.

But just as Taguiwalo claimed there were irregularities in the distribution of foreign calamity aid after the Yolanda tragedy and even during the ongoing rehabilitation efforts, she and her President should back up their claims that the country doesn’t need foreign donations at all and can help the victims sufficiently with the numbers and data to prove it.

Read Next
To depend or not: Not really the question