EU team to investigate EJKs this month, UN to follow 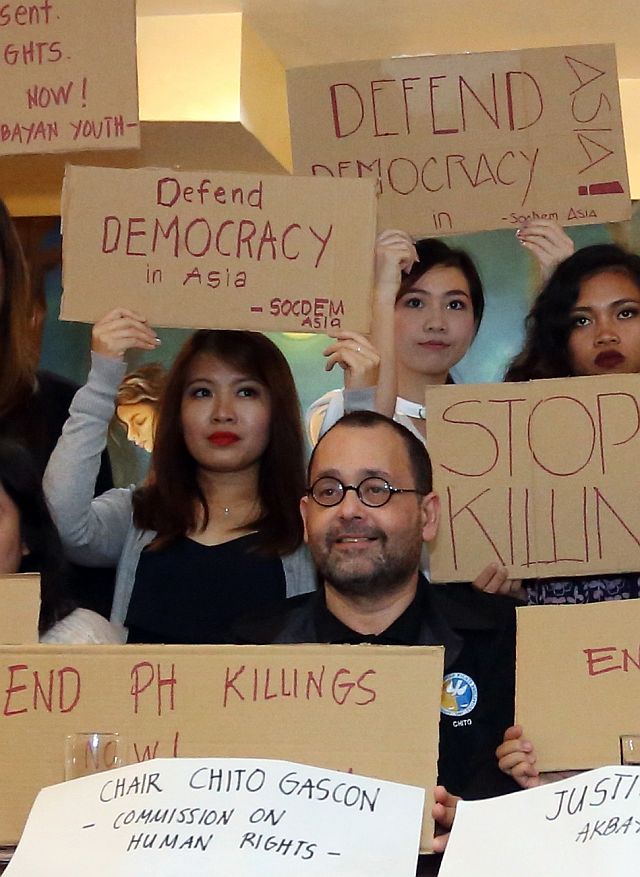 NO TO EXTRAJUDICIAL KILLINGS. Commission on Human Rights Chairman Chito Gascon joins Asian youth activists in the campaign against the so-called “killing spree” of drug suspects in the Philippines during a press conference in Cebu City on Nov. 3, 2016 (CDN PHOTO.LITO TECSON).

WITH about 4,700 people killed in the government’s anti-drug war since President Rodrigo Duterte took office, the United Nations (UN) and the European Union (EU) have began preparations to come to the Philippines to investigate the spate of executions and to review the country’s compliance with its human rights obligations.

Commission on Human Rights (CHR) Chairman Jose Luis Martin “Chito” Gascon said the Department of Foreign Affairs and the UN will discuss in the coming weeks the dates of the visit of the UN Special Rapporteur on Extrajudicial, Summary or Arbitration Executions, as well as the mandate of the special rapporteur.

Most likely, the UN probe on extrajudicial killings (EJKs) in the Philippines will officially start in the first quarter of 2017, Gascon said.

“We’re happy that the Special Rapporteur finally agreed to investigate the series of killings in our country,” he said in a news conference at the Handuraw restaurant in Cebu City on Thursday.

The team from EU is expected to come later this month, according to Gascon.
The EU team will meet with government leaders, businessmen, and economic managers to evaluate the country’s human rights, environmental, and labor conditions.

Gascon said the EU will find out whether or not the country has continued its commitment to human rights and other policies as mandated in 27 international agreements entered into by the Philippines.

If the EU will determine that the country has relaxed its commitment to human rights, he said, it will affect the General System of Preference Plus (GSP Plus) mechanism, which grants the Philippines access to the European market.

“If this team assesses that there is a backsliding or fall back in our commitment to human rights, then the GSP Plus mechanism maybe in jeopardy. Since we joined in 2014, there have been significant impact in terms of our exporters, and we would want this to continue,” Gascon explained.

During the same press conference, about 20 youths from Myanmar, Indonesia, Malaysia, Thailand, and the Philippines signed a manifesto to denounce extrajudicial killings.

“Instead of bringing security and the rule of law, we believe that the violent campaign against the drug trade has made the country more unsafe with innocent people killed, drug lords evading arrest, and murder cases rising,” the manifesto read.

“We call on the Philippine government to condemn the murder spree, immediately solve the vigilante killings, act on the failed police operations, and serve justice to the families of the murder victims,” it added.

Since July 1 to November 1, the war on drugs has led to the death of 4,791 suspected drug pushers across the country. Of the number, 3,001 were gunned down by unknown assailants while the rest were killed in police operations.
Gascon said the Philippine National Police’s Internal Affairs Service has been mandated to immediately investigate policemen involved in shootouts that led to the death of drug suspects.

So far, he said, less than 50 cases were filed before the different prosecutors’ offices and not a single case was elevated to the trial court.

“Our question is if there are already over 1,800 deaths that stemmed from police operations, should not these cases already be brought before the courts? To this day, four months since the new administration started, not a single police officer has been charged in court,” he said.

Gascon described the spate of drug-related killings in the Philippines as “unprecedented.”

But the CHR can manage to investigate only 300 of the 4,700 cases of alleged extrajudicial killings due to lack of manpower.

Gascon expressed hoped that the UN Special Rapporteur can help solve the series of killings in the country.

Read Next
TERROR THREATS IN THE SOUTH?