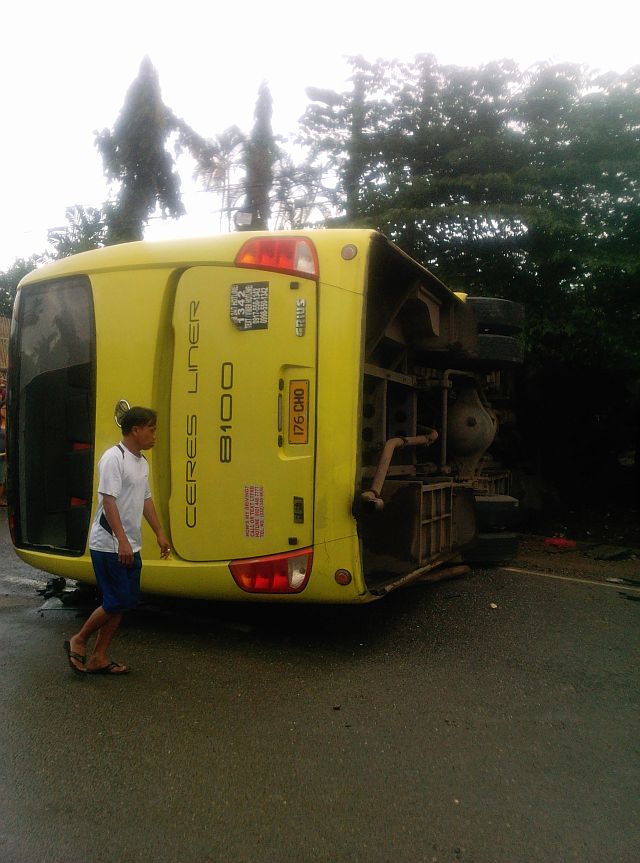 The bus lost its brakes as it traveled downhill, falling on its side.
(CDN Photo/Rene Alima)

A female call center agent died while 22 others were injured when a Ceres bus they rode in lost its brakes and fell on its side along the national highway of Upper Media Once, Toledo City at 1:20 p.m. yesterday.

Vanessa Golda Tan of Pandacan, Pinamungajan town in Cebu died at the Toledo City General Hospital of severe injuries after she was pinned by the bus when it fell on its side, said Toledo City Traffic investigator PO3 Julius Sanchez.

Sanchez said the 35-year-old bus driver John Enate of Tutay, Pinamungajan town was among the 22 persons rushed to hospitals in Cebu City.

The Ceres bus was headed to Toledo City located about 50 kilometers west of Cebu City.

Sanchez said witnesses told him that the bus was traveling down a curve road when it lost its brakes and fell on its left side.

The passengers were rescued by another bus which also happened to be heading to Cebu City at the time.

Sanchez said one of the passengers of Calvo bus identified as James Enate was the twin brother of the bus driver.

Sanchez told reporters that James was among those who helped rescue his brother and other passengers.

Read Next
No free viewing of Pacquiao fight in Cebu City