Duterte might come to Cebu for Arleigh Sitoy’s wake 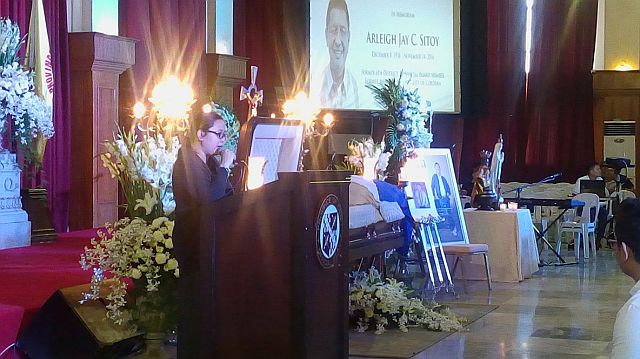 The older Sitoy, who was vice mayor of Cordova town in Cebu prior to his appointment to the Duterte cabinet, made these announcement during his eulogy for his son who, he said, really fought hard for his life.

Sitoy talked about his son in a eulogy at the Capitol Social Hall on Wednesday morning where family, friends and provincial government officials gathered to remember the former PB member, whose remains were brought to the Capitol this morning for the Mass and necrological services.

Governor Hilario Davide admitted he was not close to Arleigh but considered him a friend even if Arleigh, who used to be with Liberal Party, opted for another political party, the PDP-Laban that backed now President Duterte, during the elections. (Davide, the LP provincial chair, has opted to stay with the party even after most of his partymates have jumped to PDP-Laban after the elections.)

Lawyer Leighna Sitoy, daughter of Arleigh, thanked the province of Cebu for accepting her father and letting him serve the Cebuanos despite the latter’s physical condition. Arleigh suffered from acute pulmonary embolism and was ailing for most parts of this year before he succumbed to the ailment on November 14.

After the Mass and necrological service, the remains of Sitoy was brought to the Cosmopolitan Memorial Chapel in Nivel Hills, Lahug, Cebu City.

Adelino said his son asked to be cremated before he died. Arleigh’s remains will also be brought to the family’s home in Cordova town on Mactan Island to allow people in their hometown to pay their last respect and to bid him farewell before he will be cremated on Monday, November 21.