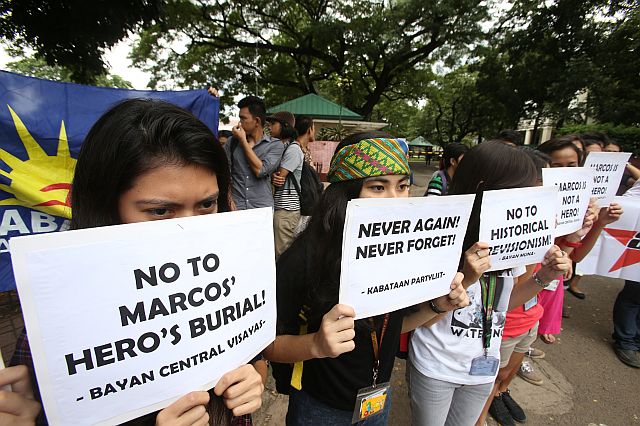 Students of the University of the Philippines College Cebu (UPCC) stage a lightning protest against the burial of late dictator Ferdinand Marcos minutes after hearing news of his scheduled burial at the Libingan ng mga Bayani (LNMB) at 12 noon, Friday. (CDN PHOTO/JUNJIE MENDOZA)

A well of emotions ranging from surprise to relief, anger to apathy, disgust to delight, frustration to indignation met the stealthy hero’s burial held for Ferdinand Marcos at the Libingan ng mga Bayani (LNMB) on Friday.

Social media ran abuzz with posts which showed how the Marcos issue could further divide a country of 7,107 islands, amid calls for protests.

“There was a motion for reconsideration filed before the Supreme Court to contest the decision to bury him at the Libingan ng mga Bayani. Legally speaking, burying him there, without a final judgment, was illegal,” said Paredes.

The High Court ruled on Nov. 9 to allow Marcos to be buried at the LNMB. Under the law, petitioners have 15 days to appeal the decision from receipt of the judgment. Petitioners received a copy of the decision only on Nov. 11.

“What if the Supreme Court will reverse its earlier decision, shall we dig him out from the grave? The Marcoses hastily buried him. They should have waited,” the retired executive judge said.

“I am devastated by the news. I am just so sad and disappointed today,” said Cuenco, calling the burial an “insult” to those who were tortured, killed and detained during the Marcos era.

“He should be brought back to Ilocos. Putting him at the Libingan ng mga Bayani is like rubbing salt to the wounds of those who suffered during the martial law,” said Cuenco.

Human rights lawyer Democrito Barcenas, meanwhile, turned his ire on President Rodrigo Duterte and the nine justices who voted for Marcos’ burial at the LNMB.

“This is a sad day for the country. Thanks to President Duterte and the nine justices of the Supreme Court. Marcos is the only kind of hero who is smuggled into the Libingan ng mga Bayani,” said Barcenas who was imprisoned for three months during martial law for joining groups opposing Marcos.

Barcenas said that ethics, propriety, as well as the rule of law dictate that the Marcoses should have waited until the decision became final.

“Normally, kay wala pa ma’y finality, duna pa ma’y kahigayonan nga duna’y mubali, mga duha o tulo, so ang balaod sa maayong pamatasan, kung magsubay ta sa rule of law, huwaton ta nila pero daan man gyud ning wa’y batasan ang mga Marcos (Normally, since the decision is not yet final and there is still a chance for it to be reversed by two or three justices, a sense of propriety and the rule of law should have made them wait. But then again, the Marcoses never had propriety),” he said.

The curtain may have fallen on the issue of Marcos’ burial at the LNMB, but history will be the final judge whether or not the former dictator deserved to be buried a hero.

While anti-Marcos forces gnashed their teeth over the late dictator’s burial, Elizabeth Abiho, a resident of Pasil, told Cebu Daily News that she had no qualms about Marcos being buried at the LNMB as she feels that he did several good things for the country especially in suppressing crime.

Abiho said that although Marcos may not be considered a hero, she is actually happy that after all these years, the former president could finally be given a proper burial.

“Kadtong Martial Law, dako kaayo ug natabang. Ang mga tawo, nangabut-an, daghang nahadlok kay kadtong mga gipangsilotan, naa man pud sila’y gihimo nga musupak sa balaod. Mao to sila gipangsilotan. Pero kung ikaw musunod, wa ka’y silot. Pag Martial Law, nindot man nuon kay way samok, way gubot, unya naa’y curfew (Martial Law helped a lot. It was good because people behaved. Only those who did not obey the law were arrested and that was why they were punished. But if you followed, you would not be punished. It was good and peaceful and there was a curfew),” she said.

For Mandaue City treasurer Regal Oliva, Marcos’ burial should be a way for the country to move on.

Following a barrage of comments describing the burial of Marcos as “sneaky,” Oliva in a Facebook post said: “It is covered by LIVE media with military guards present to honor him. Families and supporters are all there. So where is the secret there? The Marcos family respected due process, they never buried the late Ferdinand before getting a Supreme Court decision dismissing the petition to stop the burial. There was no law that was violated. Nothing is illegal in burying him… can you just at least respect the bereaved family and the dead?”

Marivir Montebon, a Cebuana US-based publisher and executive editor, however, believes that the Marcos burial at the LNMB isn’t an issue of forgiveness or a mere act of burying the dead.

“The burial of Marcos at the LNMB means we as people have continually been insulted and transgressed,” said Montebon in an FB post from New York.

“The burial is not a mere fight vs the Aquinos and the Marcoses, as Pres. Duterte downplays. Beyond politics, the burial of Marcos in the LNMB is a test by the Marcoses, a muscle flexing exercise on how they can bully the country back to power, to check on the tide of forces for or against them,” she added.

For Manila-based business executive Bernard Ong, there can be no moving on without these conditions.

“1. Marcos family must admit the wrongs & apologize. 2. Marcos family must return the loot – all of it 3. Duterte must return the money given to him by Imee – that was part of the loot stolen from the Filipino people. As a first step since the banks are closed this weekend, the least Duterte can do is tell us how much Imee gave him. He did not disclose his share of the loot in his Comelec SOCE. No Panelo invoking bank secrecy bulls**t this time.

Useful to know how much Marcos puppets cost these days. Before we throw them away,” Ong said in a post.