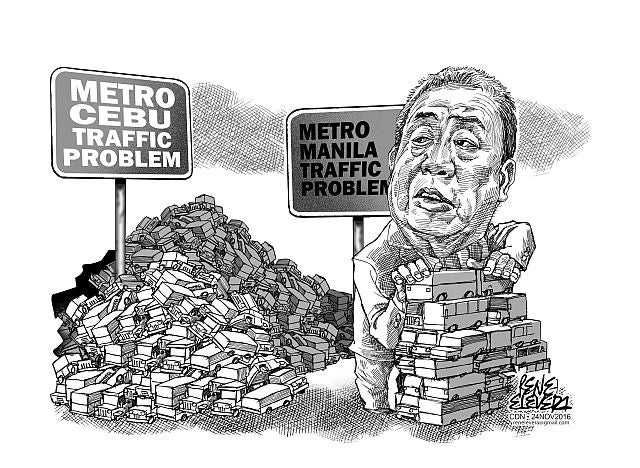 Would taking mass transportation at least once a week make Transportation Secretary Arthur Tugade and his directors more than capable of making sound policy decisions on traffic management?

That was one of the provisions of House Bill 4334 that was supposed to be consolidated by the House transportation committee yesterday and finalized this week.

The bill would officially designate Tugade, the current transportation secretary, as the country’s traffic czar and alter ego of President Duterte in overseeing the traffic management of Metro Manila, Metro Cebu and Metro Davao.

Word of the bill’s passage was greeted with mixed reactions from Cebu’s stakeholders with Cebu City’s own transport czar Rafael Yap insisting that local governments should be involved in both planning and implementing traffic programs to avoid centralizing all authority to Tugade.

That should be the case since traffic congestion is different in these areas and there is no uniform solution to addressing them. President Duterte, himself a Mindanaoan, should know by experience how frustrating it is to deal with the national government trying to impose their one-size-fits-all solutions to any problem faced by local governments outside Manila.

The bill may be passed ahead of Congress’ holiday break, but we dread to see how it would actually come into play when it takes effect. There may have been consultations held here in Cebu City and other parts of Metro Cebu, but we don’t know for sure if these are sufficient to convince the powers that be of the many reservations stakeholders have about the bill, including those voiced by Yap.

Then again, local officials themselves have not done much to improve the traffic situation in their respective areas. In one southern Cebu town, for example, a Facebook post showed a local eatery allowing its customers to occupy a sizable portion of the national highway, inconveniencing both commuters and motorists.

But though there are hits and misses, it is still important for local officials to be involved in implementing programs to regulate traffic which would include in the long term the acquisition of mass transport vehicles that would eventually service the bulk of the commuters who were forced to ride dilapidated, aging public utility vehicles.

Which brings us anew to that small provision that would require transport officials to ride mass transportation at least once a week. Does that mean they would ride the trains and buses not only in Manila but in Cebu and Davao as well?

Or would that be confined to Tugade’s subalterns and he gets to ride a jeepney, bus or train whenever there’s a prime public relations opportunity to do so?

Again, we reiterate that the framers of the proposed bill should prioritize the involvement of local governments in finding solutions to traffic congestion in their areas.

Read Next
A can of worms, figurative not literal