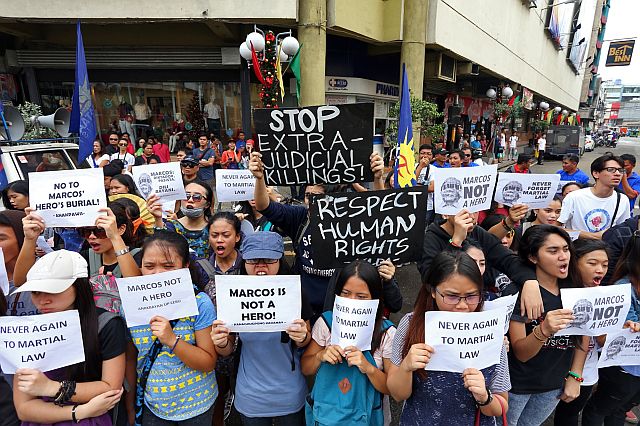 Militants shout slogans as they stage their Black Friday protest against the surprise burial of the late dictator and former president Ferdinand Marcos at the Libingan ng mga Bayani.
(CDN PHOTO/JUNJIE MENDOZA)

The protests against the “sneaky” burial of former president Ferdinand Marcos at the Libingan ng mga Bayani in Cebu continue with at least 100 protesters showing at the rally yesterday at Colon Street in Cebu City.

The protest which is also part of the “Black Friday” nationwide rallies against the surprise burial of the dictator at the LNMB, which was initiated by the Bagong Alyansang Makabayan or Bayan.

Despite the rains brought about by storm Marce, protesters from the Bayan-Central Visayas, Anakbayan, Sanlakas, Cebu Citizens Assembly and Pagkakaisa ng mga Samahanan ng Tsuper at Operator Nationwide (Piston) showed up to show their indignation of the Marcos’ burial at the Libingan ng mga Bayani.

Jaime Paglinawan, coordinator of Bayan-Central Visayas said that they want to reiterate their stand against Marcos’ sneaky burial.

“We want to show to them (Marcoses) how disappointed we are. Marcos was a dictator, traitor and thief,” Paglinawan said.

President Duterte has been vocal in public that he is in favor with Marcos burial at the Libingan ng mga Bayani as former soldier.

“He (Duterte should) cut ties and politics with the Marcos family because he is the president. Former presidents Cory and Benigno Aquino were not able to give justice to the Martial Law victims. Another challenge for Duterte is to solve and give justice to these victims,” Paglinawan added.

Niño Olayvar, vice president of Anakbayan – Visayas said in his speeh: “If he is hero then there is no enough reason why his burial became a secret. If he is a hero, then why are the Filipino people not proud of it?”

One of the artworks showed Marcos’ face with a moustache comparing him to Adolf Hitler who was also a dictator.

Other posters showed four faces of Marcos surrounded with guns while bold letters of “NEVER AGAIN” was read.

Teody Navea, secretary general of Sanlakas-Cebu that on November 30, more than 1,500 people are expected to join at Plaza Independencia in Cebu City to continue their anti-post burial protest of Marcos.

As of the moment, the screening committee is still finalizing who will be these personalities that will be included in the 10 frames.

But Navea said that he is sure with two of 10 people, these will include Sergio Osmeña and the abducted priest Fr. Rudy Romano.

“We will also finalize how we will do the signature campaign as well as the placing of markers for Marcos including the nine justices in favor of his burial at the Libingan ng mga Bayani,” Navea added.

Aside from Cebu, there were also protests in Iloilo, which was also attended by at least a hundred protesters.

Read Next
Vessel unleashed by strong waves, runs aground