The Quest for Culinary Revitalization 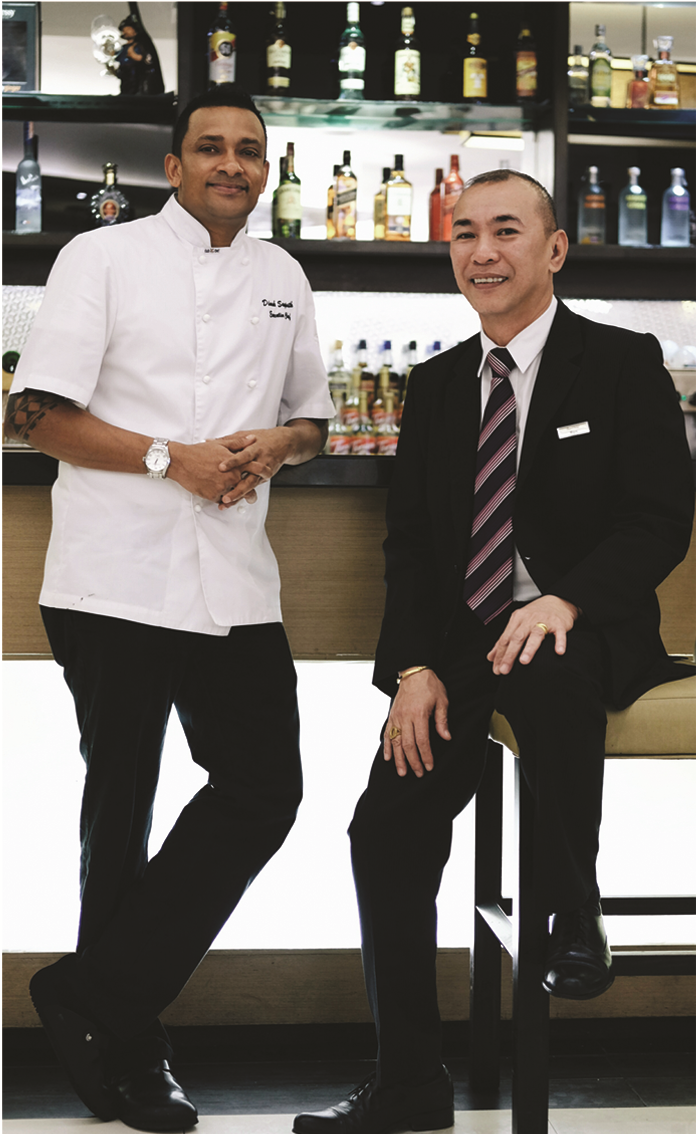 THE roads we find ourselves on in this journey called life can be rather surprising. Life takes us to places as far from home as possible and deposits us there, or it brings us back full circle to where we first began.

Such was the case for Quest Hotel and Conference Center’s two new team members, who both come from places far from Cebu but have come to love the Queen City, her culture and cuisine, and her people. Ronald Yulo, a Davao native, took on the role of Food and Beverage Manager in June this year, while Sri Lankan Dinesh Sampath donned the helm of Executive Chef for Pusô Bistro and Bar in April before that.

From Davao with love

Ronald Yulo counts thirty years and more of making people smile with exemplary customer service. From the break-neck pace of the fast-food industry to the brisk but discreet service of luxury hotels, Ronald has seen it all.

It all began with a chance trip with his grandfather during Halloween of 1983 to Manila. Fresh out of university, Ronald joined one of the pioneering teams for Pizza Hut, starting as a staff member and moving up the ranks to become part of the purchasing team, which was then followed by a reassignment to Pampanga as crew leader, then back to Manila as restaurant manager, then off to Cebu to open and look after three branches as area manager. “But that was really because I was the only Bisaya-speaking manager,” he jests.

Fourteen years and many address changes later, Ronald decided to return to Mindanao, to home in Davao, and took a massive leap from fast-food to hotel service. “It’s better that we started from the bottom, learn more about the business, then perhaps in the near future, grow, which was what really happened.” He became the restaurant manager of one of Marco Polo Davao’s in-house restaurants, before being promoted to the Food and Beverage Department as assistant manager. He then stayed on for eleven years. After that, he dabbled in managing a beach resort before flying out to Beijing, China, to work in the Food and Beverage Department of the Marco Polo Beijing.

Back in Davao three years later, Ronald sought to try something new, to start a business of his own, baking cupcakes (yes, it’s his secret passion) or perhaps catering. But Fate keeps steering him back to the hotel industry.

And here we are today, sitting across from each other in the Pusô Bistro and Bar, Quest’s signature restaurant and one of Ronald’s pet projects. Coming from five-star hotels, does it feel like a step down to be working at a hotel that boasts “affordable three-star quality?”

“There is no downgrade. Even though we are a three-star hotel, the quality of our service is easily at par with any five-star hotel.” And now that he’s joined the management team, he aims to maintain this level of quality at the restaurants of the hotel, while improving where he can. He feels that his meticulousness can be put to good use here.

As of print, Ronald has yet to stay half a year with Quest, having joined the team in June, but so far he says he’s tremendously enjoying his stay. Plus the management is very supportive of the changes that he’s proposed. “But to begin with the hotel has already done an impressive job catering to its clients.”

A long way from home

A look into Executive Chef for Pusô Dinesh Sempath’s passport would be akin to looking into an atlas.

From Negombo in Sri Lanka, where he was born, he first learned how to cook—not traditional Sri Lankan dishes but international fare. In the Middle East he worked in the kitchens of hotels boasting unsurpassed luxury. (Funny enough, it was also in the Middle East where he had a first taste of Filipino cuisine, the pinakbet, not knowing how his destiny would unfold.) In the Maldives he served his favorite Italian dishes. And in Guiyang, China, he got his first appointment to be an executive chef.

You could say that Dinesh stumbled into his passion for cooking. When he was younger, a family friend, who was the executive chef at a local hotel, would come to visit, to hang out and whip up a feast for the family. Dinesh would help the adults out, running errands in the kitchen. It was then the chef asked if he had ever considered working in a professional kitchen. “I guess he saw in me a passion for learning,” he muses, “because with me, if you give me an instruction, I will follow it until [the task] is done.”

By the time he was working, he also enrolled in a culinary course in the Ceylon Hotel School. Three years later, he got his start as a kitchen helper. Being the all-around guy and a fast-learner, he got assigned to the butchery, the cold kitchen, the breakfast banquet, the main kitchen, and the pantry.

It was a slow but rewarding way up, moving from kitchen runner to commis 1, chef de partie, and then junior sous chef. This was where he flexed his kitchen management muscles, no longer just following orders but also instructing other cooks in the execution of some dishes, dealing with logistics, and adjusting costs, particularly in the cold kitchen.

After finding himself in the Maldives and meeting the love of his life, Leah, another hotelier, they decided to move to Manila, where Dinesh took up a post in the Hyatt’s City of Dreams as chef de cuisine, with forty-five chefs reporting to him. He then moved to Guiyang, in the southwest of China, to take up an executive chef position in a hotel, which unfortunately fell through.

And after that, he and Leah came to idyllic Cebu, where Dinesh signed with Quest Hotel. The new executive chef joined the team in the first quarter of this year, and he’s currently working on enhancing the training of his staff, streamlining the procedures in the kitchen as well as fortifying the culinary team. “There has been not that many challenges in my move here except with purchasing my ingredients. I’m fairly new in the game, in the market, so I had to be very careful with dealing with suppliers, but luckily I have a friend who’s also a chef who helped me get the best deals possible.”

He likes to think of his cuisine as classical, but not very traditional. “I like to put a bit of myself in every dish I make, a signature taste or personal flavor.”

With a life as eventful as his, he still doesn’t see himself slowing down soon. “I plan to go on a Southeast Asian tour, sampling the different cuisines and flavors of the region and discovering recipes. I someday hope to open my restaurant, something casual, but that is still far off.”

With these two dynamos, Quest Hotel and Conference Center is sure to gain a massive expansion. Together Ronald and Dinesh are revitalizing Pusô. Every night they now feature a theme cuisine, so you may take a little trip around the world with every dinner, with International Mondays, Asian Fusion Tuesdays, Mediterranean Wednesdays, Western Thursdays, Mexican Fridays, Seafood Saturdays, and Pinoy Fiesta Sundays. No passport is required for this world tour! They’ve also highlighted the business-hotel aspect of Quest, offering up exciting packages to make meetings and conferences a breeze, specifically the “VIP Meetings at Quest” program, which make holding functions at Quest a stress-free yet exciting affair. Plus, with a new action kitchen in the works and longer store hours, Pusô has a lot of exciting changes ahead of it, and Cebu and all its denizens are all the more fortunate. /Jonathan Kevin Lim

Read Next
SHOW OF FORCE