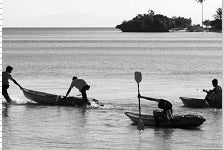 Tourists enjoy the beach in Santiago Bay, San Francisco, Camotes, which has the longest stretch of white sand in Camotes in this April 2011 CDN file photo.

THE whole of Camotes Island is now drug free.

That’s according to Cebu Provincial Police Office (CPPO) director Senior Supt. Eric Noble who said that the four towns of Camotes were the first municipalities to be declared drug free in the entire province of Cebu.

Camotes, composed of Pilar, Tudela, Poro and San Francisco, has a total number of 56 barangays, with Poro having the most number of villages at 17, followed by San Francisco (15), Pilar (13) and Tudela (11).

Across the province, 81 out of 1,066 barangays had been declared drug free by their respective mayors, local police chiefs and Barangay Anti-Drug Advisory Councils (Badac).

These barangays will, however, have to undergo evaluation by the Philippine Drug Enforcement Agency (PDEA) 7 and the Cebu Provincial Anti-Drug Abuse Office (CPADAO), Noble said.

Noble said that the areas earned their status based on standards set by the Philippine Drug Enforcement Agency in accordance with Dangerous Drugs Board (DDB) Regulation 2 which provides the guidelines for drug-clearing operations in the barangays.

According to DDB regulations, an area can be considered drug-clear in the absence of the following: drug supply or drug transit/transshipment activities; drug laboratories and warehouses, chemical warehouses; marijuana cultivation sites; drug dens; users and pushers; and drug protectors, coddlers and financiers.

A drug-cleared barangay must also have barangay officers who are active in various anti-illegal drug activities, such as a drug awareness and preventive campaign.

Poro Mayor Luciano Rama said that skills trainings and livelihood programs for drug surrenderers are being provided in their town through the Technical Education and Skills Development Authority (Tesda) and the Department of Labor and Employment (DOLE).