KO artist Santisima: A star in the making 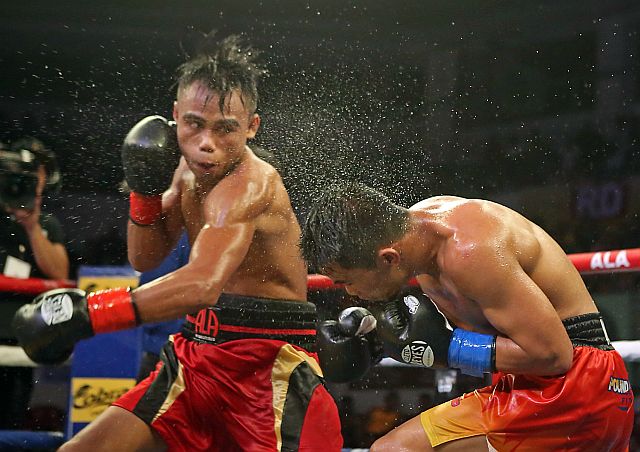 Jeo “Santino” Santisima didn’t get the start he wanted when he lost his first fight as a professional boxer in 2013. He bounced back from the faulty debut and won two in a row before losing again in his fourth outing.

It was a roller-coaster start for Santisima but he refused to let that dampen his spirits as the Masbate-native fighter went on a tear since his last defeat by winning his next 10 fights.
To say that the 20-year-old Santisima is one of the country’s promising boxers is very much an understatement as the ALA Boxing Gym stalwart chalked up 11 knockout victories in his 12 wins so far.

Santino is the second in a brood of six. He and his older brother Aldrin learned boxing through their father.

Aldrin was the first one to join the famed ALA Boxing Gym but left the stable before turning pro.

He impressed his team, manager, and promoter with his win over veteran and former Philippine super bantamweight champion Jerry Nardo in December of 2015.

In the undercard of the Pinoy Pride 35: Stars in the Making last Feb. 27, Santisima battled a formidable opponent in former Philippine superfly and bantamweight champion Marco “Singwancha” Demecillo.

At the time, Demecillo had fought more than 10 title fights and had faced foreign opponents.

But Santisima pulled off a big surprise when forced the more experienced Demecillo to quit in the sixth round after receiving a hard blow to the body. It was Santisima’s seventh straight knockout victory.

With his stock skyrocketing, Santisima remains grateful to the chances that the ALA Promotions International have given to him.

In an interview after his Nov. 26 knockout win against multi-international boxing champion Rex Wao under the Melindo-Sakkreerin Jr. IBF World championship in Cebu City, Santisima shared that he is hopeful and more determined to become a future world champion, eager to show the world that he has what it takes to become one of the biggest names in Philippine boxing.

Read Next
Arcilla caps year with domination of Dagitab net