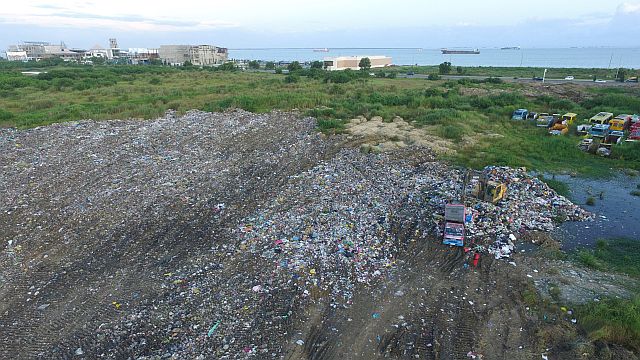 Cebu City’s transfer station for the city’s trash is getting swamped with more garbage daily until city officials can enter into a contract with a private hauler that would dump the garbage in an authorized landfill. (CDN DRONE PHOTO/TONEE DESPOJO).

While Cebu City’s garbage dump is getting larger out there at the South Road Properties (SRP), officials have finally found a way to address the rising problem which entered its fifth day on Wednesday.

City Hall has dug up on budget savings that may be used to pay for the services of a private hauler that could bring the city’s trash to any authorized landfill.

Fernandez said Cebu City Mayor Tomas Osmeña will ask the city council to hold a special session on Friday to pass a resolution authorizing him to sign a contract with a private hauler to bring the city’s garbage to a final dumping site.

The garbage is currently being dumped in a one-hectare portion of the SRP, a relatively new commercial-residential district designed as Cebu’s next economic hub, after the Court of Appeals ordered the city to immediately close its landfill in Barangay Inayawan.

The court earlier found merit in a Writ of Kalikasan petition filed against Mayor Osmeña for alleged violation of the people’s right to a healthful and balanced ecology with the continued operation of the Inayawan landfill way beyond its capacity in violation of environmental standards.

Starting last Saturday, government haulers began to bring the city’s trash away from the landfill and into a vacant lot at the SRP instead — a move that also became the subject of a cease and desist order (CDO) from the Environmental Management Bureau (EMB) on Tuesday.

“If the EMB will file charges against me, it’s okay. But I still have to collect the garbage. The question is where will I put the garbage? So if they will pressure me, I have a choice of two illegal things. One is to put it in Inayawan and defy a court order or, two, go to Consolacion (a private landfill) and face graft and corruption. Mora ko bibingka nga naay init sa ibabaw unya naay init sa akong lubot,” Osmeña said in a DYAB radio interview yesterday.

“This is my situation, but it looks like I am being hardheaded now to the people. I don’t care what happens. I don’t feel bad at all if SM suffers because I don’t like them anyway. But that’s not the point. The point is that I really don’t have a place to put it. I cannot leave it on the streets. I cannot dump it on Plaza Independencia,” he added, saying that using the SRP is the “lesser evil.”

“What we can do is we can bid it out pero ang problema, the council did not give me a budget. Nahurot and ilang budget. So how can I? … We cannot deretcho to that without bidding. Dili ko ganahan niana,” Osmeña said. 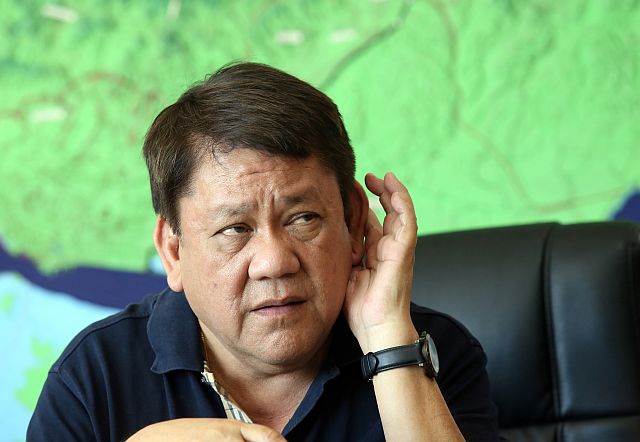 The mayor’s question finally found an answer — emergency procurement using the city’s savings; provided that the city council gives him the authority to enter into a contract with a qualified bidder.

Since it would be an emergency procurement, Fernandez said that the Bids and Awards Committee (BAC) will just choose the qualified service provider with the lowest price quotation.

Based on BAC records, at least three private service providers have already signified their interest to undertake the hauling and dumping of the city’s garbage.

But until the city signs the contract with the service provider, trash will continue to be brought to the SRP “transfer station” to store the city’s garbage for the remaining days of the year.

Fernandez said that part of the terms of reference for the emergency procurement is that the city should not pay more than P1,400 per ton of garbage to be hauled and transported by the service provider to a final dumping site.

With Cebu City’s average of 500 tons of trash collected daily, the figure would amount to at most P700,000 daily or P4.9 million weekly in hauling and garbage tipping fees.

The city’s P9.2 million savings are thus expected to cover the cost of garbage collection and disposal for the last two remaining weeks of December.

“So, we hope that with this, we can work out an emergency solution as soon as possible until December 31,” Fernandez told reporters yesterday.

Sought for comment, Cebu City Councilor Joel Garganera, head of the council’s environment committee, said that they will support the executive department.

“I’m very, very happy with this development. Morag gidungog ang atong pag ampo nga (It’s like our prayers have been heard) somehow. Let us not look into each other, criticize each other. But let’s look forward together in one direction. And that is to keep Cebu City clean,” Garganera said.

After the year ends, Fernandez said they will bid out another contract with the service provider for the month of January 2017.

This time, the budget for the contract will be charged to the city’s approved annual budget which includes a P121 million appropriation under the Department of Public Services (DPS) for tipping fees.

Last Tuesday, the city council approved the city’s P7.2 billion annual budget for next year. The papers are en route to the mayor’s office for his approval.

Meanwhile, Osmeña warned barangay captains that he will file charges against them if they decide not to collect garbage in their respective villages.

Reports had reached the mayor that Sto. Niño barangay captain Pancho Ramirez Sr. refused to pick up garbage because he had no place to put it.

Sought for comment, Ramirez explained that they already started collecting and dumping their garbage at the SRP yesterday after days of not knowing where to dump their garbage in the absence of an official order from the mayor or the DPS.

“We just wanted to be sure. So we waited for an order,” he said.

Read Next
232 DOWNED BY FOOD POISONING