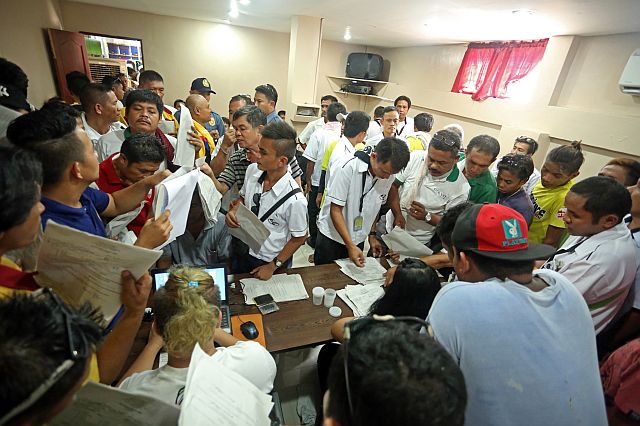 Bus drivers, conductors, and helpers at the Cebu South Bus Terminal gather in the conference room of the terminal for a surprise drug test conducted by the Land Transportation Office on Wednesday. (CDN PHOTO/LITO TECSON)

TEN people, including two women, tested positive for illegal drug use in a surprise drug test initiated by the Land Transportation Office (LTO) at the Cebu South Bus Terminal (CSBT) on Wednesday.

Herrera said that the drivers’ licenses were confiscated by the LTO; while the eight conductors will be banned from the terminal.

Jonathan Tumulak, who heads the CSBT Security Management, said that one bus driver admitted that he was using illegal drugs last Sunday.

Tumulak said the surprise drug test was triggered after Ernesto Fondales, 40, a water vendor, was arrested with a small sachet of shabu (methamphetamine hydrocholoride) and strips of tinfoil at South Bus Terminal Sunday afternoon.

“This is also to ensure the safety of the passengers this coming Christmas season,” Tumulak said in Cebuano.

Fondales was arrested after police received a tip that the water vendor was selling drugs at that time.

During investigation, Fondales admitted to Tumulak that he was selling shabu and then revealed the names of bus drivers, dispatchers, conductors who were his customers./USJ-R Intern Jheysel Ann Tangaro