Obama says ‘yes we did’ in emotive farewell address 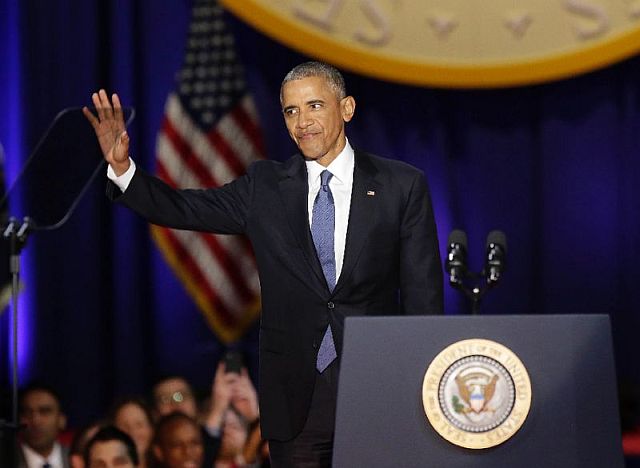 Capping his eight years in office, US President Barack Obama returned to his adoptive hometown of Chicago to recast his “yes we can” campaign credo as “yes we did.” (AFP)

CHICAGO — Barack Obama addressed America and the world for the last time as US president Tuesday, in a speech that was both a tearful goodbye and a call to arms.

Capping eight years in the White House, Obama returned to his adopted hometown of Chicago to recast his “yes we can” campaign credo as “yes we did.”

Surveying the staging posts of his presidency – from the Iran nuclear deal to reforming healthcare – the speech sought to lift supporters shaken by Donald Trump’s shock election.

Obama urged them to pick up the torch, fight for democracy and forge a new, fairer, “social compact.”

“For all our outward differences, we are all in this together,” he said, warning that naked partisanship, racism and inequality all threaten democracy.

“All of us, regardless of party, should throw ourselves into the task of rebuilding our democratic institutions.”

The incoming Republican president has smashed convention, vowed to efface Obama’s legacy and hurled personal insults left and right, while in a virtually unprecedented move US intelligence has accused the Kremlin of seeking to tip the election in Trump’s favor.

Democrats, cast into the political wilderness with the loss of the White House, the Senate and the House of Representatives plus a majority of statehouses, are struggling to regroup.

Obama painted the task ahead as a generational challenge.

“A faith in reason and enterprise and the primacy of right over might,” he said, had allowed the United States to “resist the lure of fascism and tyranny during the Great Depression, and build a post-World War II order with other democracies.”

“That order is now being challenged,” said Obama in comments that resonate as Americans ponder whether Russia helped to put Trump in the White House.

“First by violent fanatics who claim to speak for Islam; more recently by autocrats in foreign capitals who see free markets, open democracies and civil society itself as a threat to their power.”