A ‘smaller’ Our Lady of Guadalupe joins the Sto. Niño in this year’s Traslacion 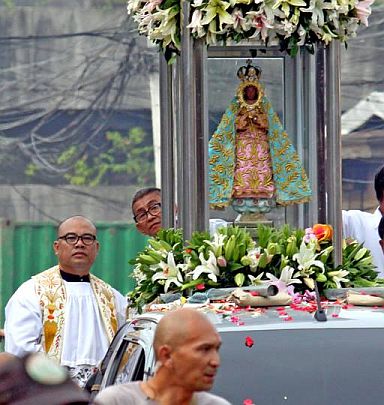 Fr. Romeo Desuyo accompanies his image of the Our Lady of Guadalupe during the Traslacion motorcade on Friday morning. The new image is shorter than the icon used in previous years.(CDN PHOTO/JUNJIE MENDOZA).

A smaller but elegant image of the Our Lady of Guadalupe de Cebu is accompanying the Sto. Niño icon in the Traslacion and fluvial procession this year.

Fr. Romeo “Dodong” Desuyo of the Archdiocesan Shrine of Our Lady of Guadalupe in Cebu City assured that the decision to use a smaller image for the Traslacion and fluvial processions was well thought out.

“I prayed and was inspired to use a smaller image that would fit the urna (glass case) and is easier to carry,” he told Cebu Daily News.

Using a wood he found, Desuyo carved the face for the new statue of the Blessed Virgin Mary that took him two weeks to finish. The face resembled the original image enshrined at the main altar of the church, including the color and skin tone, while the body was taken from another image of the Blessed Virgin Mary, whose ivory head Desuyo had donated to the Basilica del Sto. Niño.

Desuyo garbed the image in traditional blue and pink dress intricately embroidered with gold threads of flowers and leaves.

The image, 18 inches tall, is six inches shorter than the icon of the Our Lady of Guadalupe, which was used in past Traslacion and fluvial processions.

Desuyo’s new image of the Our Lady of Guadalupe, ensconced in a glass case adorned with white and pink lilies, will sail on a yacht together with the Sto. Niño de Cebu down the Mactan Channel for the fluvial procession today.

Desuyo, a Marian devotee, was assigned at the Virgen delos Remedios Parish in Odlot, Bogo City — a church he built in honor of the Blessed Mother. He was transferred to Our Lady of Guadalupe Parish last September.

Read Next
Suspect in killing of Catmon police chief surrenders