KathNiel in Moalboal to shoot film 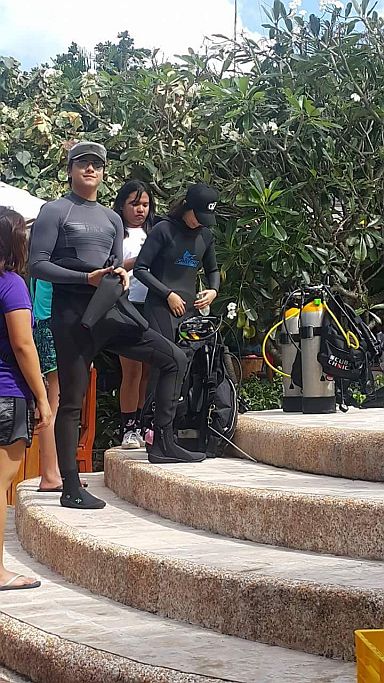 Daniel Padilla
and Kathryn Bernardo shoot scenes in a resort in Moalboal for
their upcoming film. (Contributed photo)

Photos of Kathryn and Daniel spread online as they were seen inside the Cabana Beach Club Resort in Moalboal, located at the southwestern tip of Cebu.

According to Malyn Mayorga, who spotted the Kapamilya stars, the two were practicing their dive at the resort’s pool yesterday morning before they transferred to the open sea, for the film’s official shoot.

Their co-stars, such as Kristel Fulgar and Janus del Prado, were also spotted at the resort.

The film will be the first movie project of KathNiel for 2017, marking their return to the big screen after the “Barcelona: A Love Untold.”

It will be a busy year for Kathryn and Daniel, since they will also be returning to the Kapamilya primetime night with “La Luna Sanggre,” the third installment of ABS-CBN’s hit fantaseryes “Lobo” (2008) and “Imortal” (2011).