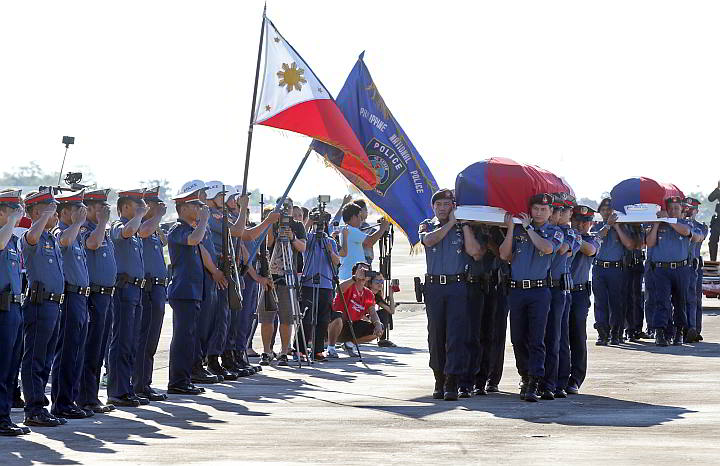 HER request for educational assistance for her nine-year-old son had been approved.

Candano, a resident of Dumanjug town located 79.4 kilometers south of Cebu City, has been grateful for the assistance from the government. But the Cebuana widow is not completely happy.

“I want justice to be served and a Medal of Valor for my slain husband,” she told Cebu Daily News over the phone.

A Medal of Valor, she said, would mean a full scholarship for her son from grade school to college.

“All of them offered their lives for our country. Isn’t it proper to honor them with the Medal of Valor?” she said.

“But if the government won’t heed our request, then there’s nothing we can do,” she added.

Candano’s husband, PO2 Windel Candano, and another Cebuano PO1 Romeo Cempron were among the 44 SAF troopers who died during a botched police operation that targeted terrorists Zulkifli bin Hir and Abdul Basit Usman in 2015.

To commemorate the second death anniversary of the SAF 44, a Mass will be celebrated at the chapel of the Police Regional Office in Central Visayas (PRO-7) at 8:30 a.m. today.

SAF troopers in Cebu and families of the two Cebuano policemen who were killed in the Mamasapano clash are expected to attend the event.

Like the families of the other slain SAF troopers, Candano expressed hopes that President Rodrigo Duterte will make good of his promise to grant a Medal of Valor to all 44 members of the elite police force, and to increase their monthly pension, the amount of which she refused to reveal.

Candano, who works as a mail woman in Cebu, said they badly need financial support from the government aside from seeking justice for the death of their loved ones.

The government promised to grant an educational assistance to Candano’s only son. But she said the benefit is limited to just P18,000 every year.

“Where do I find money to pay for the remaining amount. We’re really hoping that the government will provide a full scholarship for my son,” she said.

Most of the families of the SAF 44 received educational aids and livelihood assistance.

Two years ago, after the death of her husband, Candano also sought to be enlisted as a member of the PRO-7.

However, she was already over 30, the required age to become a policewoman.

Candano, 32, said she decided to forego her plans and instead focus on raising their only son who is currently a Grade 3 pupil in a private school in Cebu City.

“It’s also good that I did not become a policewoman because if I did, who will take care of my son?” she said.

Although two years have passed since her husband’s brutal death, Candano said the pain remains.

“I think the pain will last a lifetime. I miss my husband so much,” she said.

Candano said she makes it a point to visit the grave of her husband at the Cebu South Memorial Garden in Talisay City every Sunday.

“I will really fight for him whatever it takes. There’s no time for me to be tired. Justice should be served for the death of my husband and the rest of the SAF 44,” she said.