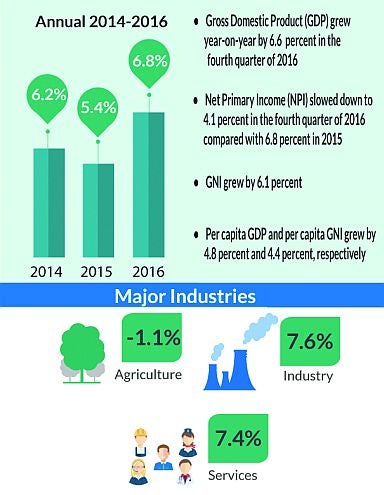 The country’s economic performance according to the Philippine Statistics Authority.
PSA

Business leaders in Cebu welcome the country’s strong economic performance in the last quarter of the 2016, with economy growing by 6.6 percent during that period.

However, the business leaders said that the country could have done better especially during the last quarter of the year.

Glenn Soco, president of the Mandaue Chamber of Commerce and Industry (MCCI), said he expected a higher growth rate for the fourth quarter of 2016 considering the momentum that was established earlier.

“But we are happy with the overall performance for 2016,” Soco said in a text message.

The Philippine Statistics Authority (PSA) on Thursday reported that Gross Domestic Product (GDP) posted a 6.6 percent growth in the fourth quarter of 2016, driving the economy to grow by 6.8 percent for the entire year.

PSA said the fourth quarter growth was the slowest recorded for the year, but was higher than the 6.5 percent growth in the same period of 2015.

Full-year economic growth was still within the 6–7 percent growth target of the Duterte administration for the year.

“Our growth is still one of the highest in Asia and we could only foresee a stronger economic performance this year in lieu of the reforms that have been laid down by our government,” said Soco.

The main drivers of growth for the quarter were manufacturing, trade, real estate, renting and business activities.

Services decelerated by 7.4 percent compared with the 7.8 percent growth in the fourth quarter of 2015.

Meanwhile, agriculture declined further by 1.1 percent. In the same period of the previous year, it dropped by 0.2 percent.

Cebu Chamber of Commerce and Industry (CCCI) president Melanie Ng, for her part, said there was a need to continue capturing opportunities and address issues that will drive economic growth.

Ng gladly noted that industry was still one of the strongest drivers of growth for last year.

“We’re very optimistic and looking forward to even more growth this year,” she said.

Gordon Alan Joseph, president of the Cebu Business Club (CBC), said he expected the latest figures but would have liked to see higher real growth.

“We need to take a closer look at the dynamics and drivers of our growth. We need to determine if the growth is in fact trickling down through our population. Percentages and averages are meaningless if the poor in our country remains poor,” he said.

Joseph said it would be necessary to drive the agriculture sector and continue pushing the manufacturing sector to stimulate real growth.

Donato Busa, MCCI immediate past president, said that he also expected the Philippines to get a lower GDP growth in the fourth quarter.

Busa said that this was due to a large capital outflow in the second half of 2016, brought about by investor uncertainty amid the political ambivalence of the Duterte administration.

Read Next
Minglanilla to set up own business chamber