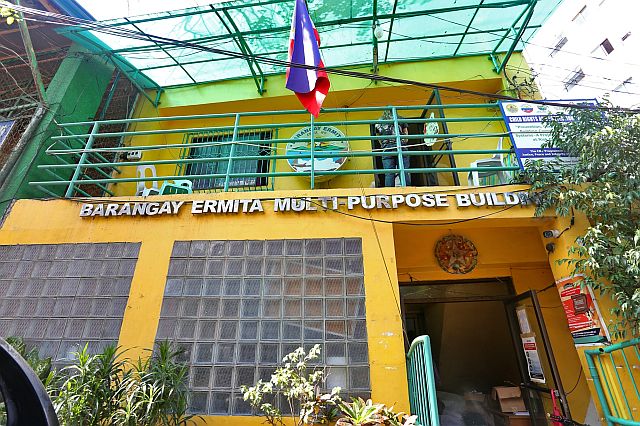 No caretaker has yet been appointed for Barangay Ermita following the suspension of all its elective officials. Many complaints have surfaced, especially in the issuance of barangay clearances as there is no authorized signatory.
CDN PHOTO/JUNJIE MENDOZA

Many services in Barangay Ermita are now at a standstill following the suspension of all its barangay officials.

Among the problems encountered by residents is the non-issuance of barangay clearances, which is a requirement for many transactions, including job applications, application for senior citizen’s card, etc.

Jonna Olayer, 25, was among those who went to the barangay yesterday. She needed to get a barangay clearance as a requirement for her application to work as a nurse.

“It’s very unfortunate. I can’t do anything for now. I was just told to wait until there is somebody appointed and authorized to sign the barangay clearance,” she told Cebu Daily News.

The Department of Interior and Local Government (DILG) still has not received any word from the Office of the President as to who will be appointed caretaker following the six-month preventive suspension of Barangay Captain Felicisimo Rupinta and all seven barangay councilmen.

Cebu City Councilor David Tumulak volunteered himself to temporarily act as caretaker of Barangay Ermita until the President appoints someone to take over. In a press conference yesterday, Tumulak said that the residents in Ermita deserve to receive the basic services which may be hampered with the temporary vacancies. “If the law permits and if the DILG or Office of the President will allow me to manage and supervise, (I will help) not only on anti-illegal drugs campaign but also on the progress of the barangay,” he said.

Tumulak said the vacancies could create chaos and confusion for the residents. “I received reports that some bystanders (who are linked to illegal drugs) in the barangay bully the tanods and barangay workers there,” he said.

Tumulak said he is well aware of the risks but he is willing to hold two concurrent positions as city councilor and acting village chief of Ermita.
Mayor Tomas Osmeña welcomed Tumulak’s decision, saying it is best to put someone who is willing to do the job. “He (Tumulak) likes action. He likes excitement. At least there is a thrill,” he said.

Osmeña earlier said that if by Monday, the DILG still has not appointed a caretaker, he will assign lawyer Winifredo A. Orcullo Jr.
Now that Tumulak has publicly volunteered his services, Osmeña said Orcullo will help Tumulak with the legal matters. “He (Orcullo) should still be in the picture because it is a very controversial situation. So people will be challenging his authority as the captain. He (Tumulak) needs legal assistance,” the mayor said.

Tumulak said if he assumes as caretaker, he will first meet with the barangay workers. “Policies must be set. There is direction and delegation of responsibilities and all the residents must follow,” he said.

He also said that he will request the residents to shut off all their closed-circuit television cameras (CCTV). “It is very clear. Why would you install a CCTV? What is the purpose? Daghan diay kag kwarta diha nga imong gitaguan kay gusto ka makabantay? (Do you have so much money hidden that you want to be alerted all the time?)” he said.

Both DILG 7 director Rene Burdeos and DILG Cebu City acting director Emma Joyevelyn Calvo said there are still no updates on the appointment of the caretaker.

(A lot of people come asking for barangay clearances which they need to apply for work. But for now, there is nobody who can sign. We can’t do anything about this.)

There are also residents who visited the barangay hall asking for financial assistance.

Juab said when Rupinta was still sitting as barangay captain, he would use his own money to give to those asking for help.

Lorna Kilat, 56, said she had a wound on her leg last week and she was personally assisted by Rupinta.

(Our barangay captain is very generous. I was wounded and he gave me money to buy medicine. We don’t have anybody else to go to for our problems but him.)

Other barangay services, however, have not been affected.

Juab said their two dump trucks continue to collect the garbage in the barangay including the nearby Carbon Public Market.

(But if the trucks break down, we can no longer collect the garbage. Before, if the trucks needed repair, Rupinta would pay it and even buy gasoline out of his own pocket.)