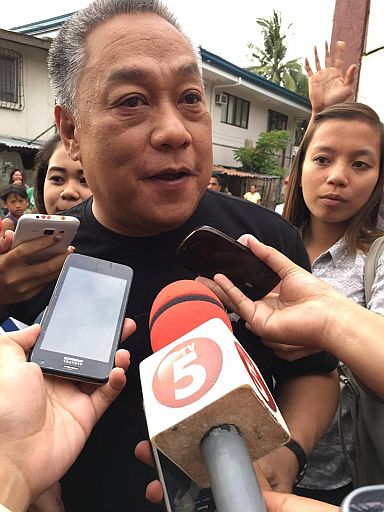 Cebu Gov. Hilario Davide III commits to extend assistance to the family of the 4-month-old baby who was raped in Carcar City. (CDN PHOTO/IZOBELLE T. PULGO)

Cebu City–Cebu Governor Hilario Davide III promised to release P10,000 cash aid, housing materials and milk to the family of a four-month-old baby who was sexually molested by a neighbor in Barangay Perrelos, Carcar City, 40 kilometers from here.

(We’ll provide materials to help finish the construction of their house. We’ll also provide financial assistance for her needs while they are staying at the center)

Davide said the baby, who was discharged from the hospital, is now recovering from her injuries.

Police investigation showed that suspect Jonathan Marfe took the baby, who was then sleeping beside her mother, shortly before midnight on February 8.

Marfe gained access into their home since the family only used a curtain for their door. The baby’s father was also sleeping with the other children in another room.

The infant was later found with blood on her genitals in a coconut field located 100 meters away from her family’s house. The baby’s diaper and a bottle of coconut wine were also found about a meter away from where the baby was.

Police arrested Marfe, the main suspect in the infant’s abduction and rape, on Friday.

Davide and his wife, Jobel, visited the baby at the DSWD field office on Wednesday afternoon to personally check on her condition.

The little girl, Davide said, was in a good mood when they visited and even laughed while she was held by Jobel.

Before he left, Davide said, he made a commitment to release P10,000 cash aid to the child’s family and milk for the baby.

The provincial government will also be giving them construction materials to especially make sure their house will already have a door.

Marivic Garces, head of the Provincial Social Welfare and Development Office (PSWDO), said their office is also providing assistance to the baby’s family in pursuing charges against Marfe.