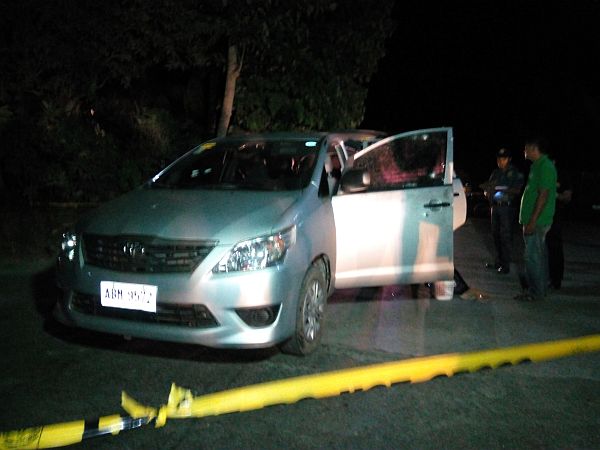 Police inspect the vehicle of lawyer Mia Manuelita Cumba Masacariñas-Green, who was killed in an ambush in Tagbilaran City, Bohol on Wednesday afternoon.
/Inquirer Visayas

TAGBILARAN CITY, Bohol — The alleged mastermind and the gunman in the killing of an environmental lawyer eluded arrest on Friday morning.
Lloyd Lancer Gonzaga, 34; and Romarico Benegi-an, 33, a native of Davao Del Norte, were no longer inside their rooms at the resort owned by Gonzaga when the policemen barged in.

Gonzaga, a resident of Panglao town in Bohol, was tagged as the mastermind in the killing of Mia Manuelita Mascariñas-Green, who was shot while driving home with her three children and nanny on Wednesday afternoon.

He was linked to the killing after he was seen in a heated argument with Mascariñas-Green inside the courtroom recently, police said.

Mascariñas-Green was the lawyer of Conrada Blomqvist who sued Gongaza over a land conflict in Panglao, known for its white sand beaches and posh resorts in Bohol.

Benegi-an was identified by witnesses as one of the four men on board two motorcycles that blocked the Toyota Innova of Mascariñas-Green at the corner of H. Zamora and J.A. Clarin Streets in Dao District while heading home to Loon town, Bohol, past 4 p.m.

The gunmen then fired at the lawyer while her children — a 10-year-old girl and two-year-old twins and a nanny — watched in horror at the backseat of the vehicle.

Both Gonzaga and Benigi-an were allegedly arrested in October last year for possessing high-caliber firearms, ammunition and illegal drugs during a raid in Panglao.

They were released after posting bail.

The police were able to secure a search warrant on Alona Embrace Hotel in Panglao owned by Gonzaga where the suspects were hiding./Inquirer.net