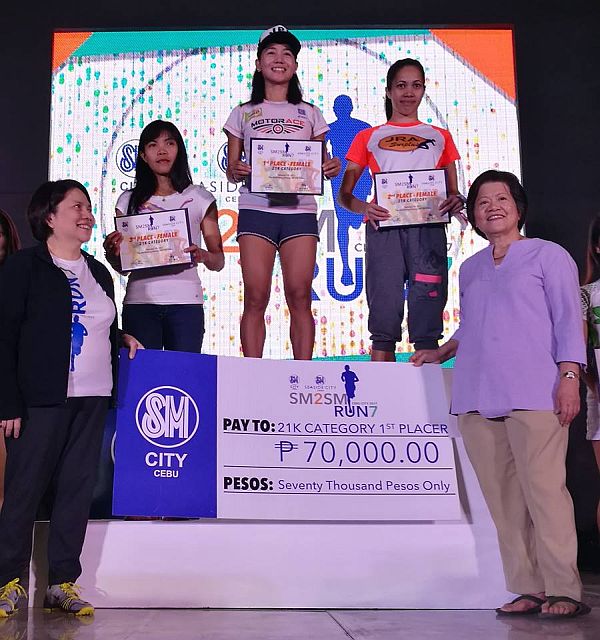 After winning in SM2SM Run, Tabal to start rigid training

Following an impressive showing in the SM2SM Run 7, Mary Joy Tabal will now start focusing on her training for the upcoming Southeast Asian Games (SEAG).

Prior to the race, Tabal, a native of Barangay Guba, Cebu City, said this will be her last race before she starts training for the biennial meet to be held in Kuala Lumpur, Malaysia this August.

“Just like what I said before, the SM2SM Run will serve as an assessment of my recovery after the Milo Marathon last December,” Tabal, who pocketed P70,000 for winning the race, said. “So far, I think I can say that I have recovered well and am ready to undergo rigid training again.”

Aside from being the first Filipina Olympic marathoner, Tabal made history before the end of 2016 when she became a four-peat champion in the National Milo Marathon Finals’ 42k race. She is so far the only runner to complete such feat.

Next stop for Tabal and her trainer John Philip Dueñas is Tuscany, Italy, where she will train for the SEAG. Tabal is trying to improve her silver medal finish in the 2015 edition of the meet.

“We are still compiling all of the needed documents for our Italian visas. I think we will fly there on April. We will train there for a month along with other Olympians and international long distance runners,” Tabal said.

Around 7,000 runners joined the annual footrace organized by the SM Prime Holdings Inc. for the benefit of the Cebu City Task Force on Street Children and the Cebu News Workers Foundation (CENEWOF).

Read Next
Alarin succumbs to same kick that downed teammate