‘Shoot down suspects if they resist’ 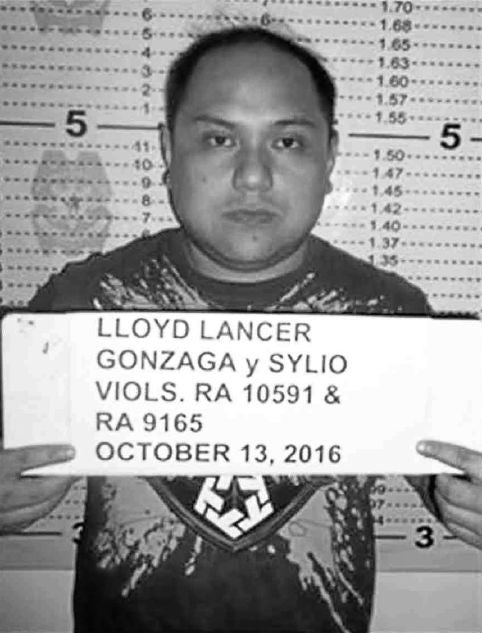 Lloyd Lancer Gonzaga’s mugshot after he was arrested on charges of illegal possession of firearms and drugs in October last year.

Police were given the green light to shoot down the suspects in the murder of a Bohol-based ecology advocate “if they decide to fight back.”

“(They are wanted) dead or alive kung lalaban sila (if they will fight back),” said Chief Supt. Noli Taliño, Police Regional Office in Central Visayas (PRO-7) chief, in reference to the suspects in the murder of lawyer Mia Manuelita Mascariñas-Green.

Last Feb. 15, Green was ambushed by unidentified suspects as she drove her three kids home in Tagbilaran City, Bohol province.

Gonzaga, a resident of Panglao town in Bohol, was tagged as the mastermind behind Green’s murder after he was spotted arguing with Green in court, police said.

Green, who was married to a British biologist, was the lawyer of Conrada Blomqvist who is mired in a land dispute with Gongaza, her son-in-law in Panglao.

Taliño said they went to the resort where the two men stayed but they were gone.

Taliño said they are looking for another suspect who shot Green.

“Based on the latest information we received, there were two gunmen plus the mastermind that were present in Green’s murder,” he said.

While Green’s family was thankful for the outpouring of support, they said they will constantly follow up her case with the police.

“We, Atty. Mia’s family, remain steadfast in our quest for justice, buoyed by our faith that the authorities are doing everything in their power to bring the perpetrators and their accomplices to justice,” a press statement they issued yesterday stated.

Family members described Green as an advocate, a woman of character who remained fearless in her convictions, a devoted mother and someone who left behind a precious legacy especially for her children Zoe, Eli and Zia to remember.

They said Green faced at least four attempts for her disbarment and received death threats.

“She never backed down from any situation, dutifully doing her work and faithfully following the creed of her profession as a lawyer,” they said.

Blomqvist said Green was merely caught in the dispute between her and Gonzaga.

She said she tapped Cebu-based lawyer Inocencio dela Cerna to handle her cases.

These include the cancellation of the certificate of registration over the vehicle owned by Blomqvist which Gonzaga claimed as his own and the dispute over ownership of Alona Embrace Hotel in Panglao.

Read Next
Exporters urged: Get ready for the rebound