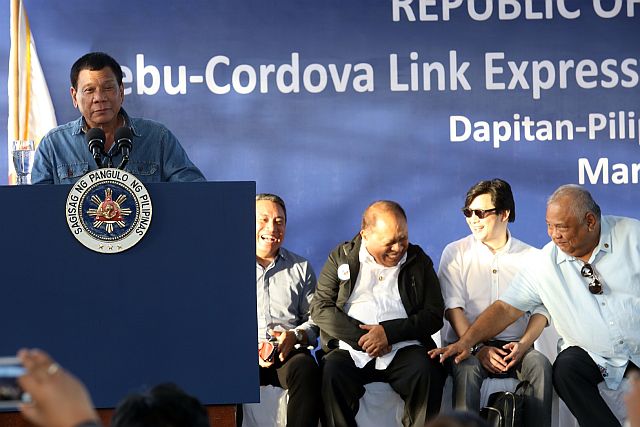 Presidential Adviser for Legislative Affairs Adelino Sitoy (seated second from left) shares a laugh with Presidential Assistant for the Visayas Michael Dino and Executive Secretary Salvador Medieldea as President Rodrigo Duterte cracks some jokes during his message for the groundbreaking of the Cebu-Cordova Link Expressway in this March 2, 2017 file photo

Former Cordova Mayor Adelino Sitoy will lobby for the inclusion of a road network upgrade that will complement the Cebu-Cordova Link Expressway (CCLEX) project in the government’s national budget for next year.

Sitoy, now the presidential adviser on legislative affairs and head of the Presidential Legislative Liaison Office, said P4 billion worth of projects for Cordova town were endorsed to the Department of Public Works and Highways (DPWH).

“These infrastructure projects are needed to complement the upcoming third bridge,” Sitoy told Cebu Daily News in a phone interview.

Construction for the project, which broke ground earlier this month, will start later this year and is targeted for completion by 2020.

Among those being endorsed to the DPWH were road openings for coastal highways.

These include the access road from Pilipog Bridge where the CCLEX will end at the Cordova side going to Gabi Bridge.

“This is important because Pilipog Bridge is where the CCLEX will end. We need to connect it to Gabi Bridge which opens a shortcut access to the resorts of Lapu-Lapu City,” he said.

Another access road is being proposed from Pilipog Bridge to the tourism area in Barangay Day-as in Cordova.

Sitoy said he will also lobby for the inclusion of the upgrading of the Mactan Circumferential Road on the Cordova side worth P2 billion.

Cordova’s municipal engineer Soripo Singculen said traffic movement is expected to be concentrated in their town once the third bridge is completed.

“Though traffic will be decongested in Mandaue City, vehicles heading to Lapu-Lapu City will pass through Cordova town,” he said.

Singculen said the Mactan Circumferential Road is only 10 meters wide.

He said a 30-meter-wide access coastal road starting from Barangay Pilipog to Barangay Gabi can accommodate motorists and commuters heading directly to the beaches of Lapu-Lapu City and the Mactan Cebu International Airport.

Another alternative is to open another road from Barangay Ibabao going to the General Aviation Road in Lapu-Lapu City located right beside the existing airport.