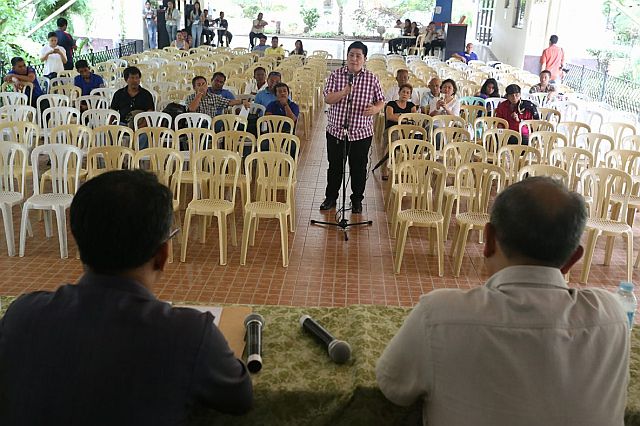 Citrasco President Ryan Bejamin Yu (standing center), who petitioned a fare surge for public utility jeepneys (PUJs) during peak hours, explains his proposal before Land Transportation Franchising and Regulatory Board (LTFRB) 7 officials in a public hearing called by LTFRB-7, Wednesday. While the issue is of great public interest, sadly, the hearing held at the Cebu Normal University was attended by only around 20 people.
CDN PHOTO/JUNJIE MENDOZA

Following strong objections to its proposal for a fare surge on peak hours from 7 a.m. to 9 a.m. and 5 p.m. to 7 p.m., the Cebu Integrated Transport Service Cooperative (Citrasco), a drivers’ organization, will seek a fixed fare hike of P1 to P1.50 instead.

In a public hearing called by the Land Transportation Franchising and Regulatory Board (LTFRB-7) Director Ahmed Cuizon on Wednesday, commuter representatives and LTFRB officials expressed fears that a fare surge would lead to several disagreements between drivers and their passengers.

The hearing was meant to discuss two petitions for a fare increase submitted by Citrasco and Basak Lapu-Lapu City Jeepney Operators and Drivers Association Inc. (Balacjoda) on February 10.

Citrasco sought a fare surge while Balacjoda was asking to increase the minimum fare to P8 and add another P1.50 fare surge during peak hours.
Lawyer Edwin Antipuesto, LTFRB-7’s hearing officer, only recognized Citrasco’s petition as Balacjoda failed to comply with requirements for a fare hike petition such as its publication in a local daily.

He said that drivers who used to make a minimum of seven round trips a day now only manage five to six round trips.

If LTFRB approves a fare surge, drivers will be able to earn another P100 to P120 per day that can be added to their earnings, he said.

Yu said drivers will be required to install a clock on their units to monitor the time, together with their passengers, for the implementation of the fare surge.

The amount of payment for the fare surge will be determined from the time a commuter boards the jeepney, Yu said.

But Cuizon expressed apprehension that the scheme would result to driver-commuter arguments.

Cuizon also asked Yu what guarantees he had that drivers will not manipulate or tamper with the passengers’ boarding time.

Commuter representatives, who attended the hearing, suggested that rather than implement a fare surge, it was time to adjust the P6.50 minimum fare for jeepneys.

“Mora gyud og ga-create ka og kagubot (It’s like you’re creating chaos) between the commuters and the drivers (if you implement the fare surge),” Ocleasa told Citrasco’s Yu during the hearing held at the Cebu Normal University (CNU) Centennial Stage.

Ocleasa said she would not mind a minimal increase in PUJ fare provided that drivers implement the 20 percent discount for senior citizens and students.

She said drivers should also make sure that their passengers were comfortably seated during the trip.

Commuter Melguido Castillon said a 50 centavo fare hike would be enough in lieu of the fare surge.

Yu told LTFRB-7 officials that Citrasco will submit to their office, at the soonest possible time, an amended petition for a fare increase.

Meanwhile, Greg Perez of Piston said that congestion was an even bigger problem compared to the need to increase the minimum fare in Cebu.
Piston is pushing for the implementation of a uniform minimum fare rate in the country.

Read Next
Guardo attends ambulance turnover in Sambag I