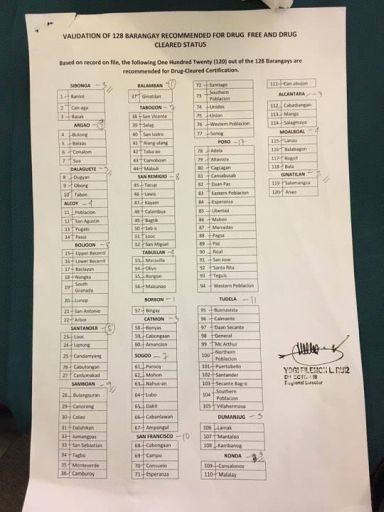 120 barangays from 22 municipalities of the province of Cebu were declared drug-cleared as of April 11, Tuesday, by Philippine Drug Enforcement Agency in Central Visayas (PDEA-7) Director Yogi Filemon Ruiz.

Ruiz chairs the oversight committee that assessed and monitored these barangays, which under the Dangerous Drugs Board (DDB) guidelines, have to comply with 14 parameters including the absence of drug pushers, users, and laboratories in their area before they can be declared as drug-cleared.

In his message before the different officials during the ceremony recognizing these barangays, Governor Hilario Davide III said that he hopes that each LGUs’ campaign against illegal drugs would continue despite the challenges that they may face in maintaining their status as “drug-cleared”.

Cebu Provincial Police Office (CPPO) outgoing director Sr. Supt. Eric Noble, urged everyone to trudge on in the government’s war against drugs until the province of Cebu will eventually become “drug-free”.

(I know that with the support of our Governor, we can make our dream of a drug-free Cebu a reality soon.)