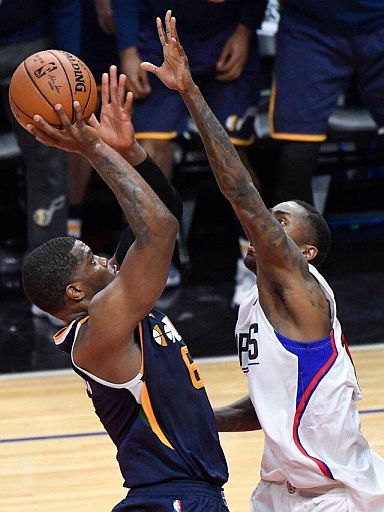 Joe Johnson of Utah drives past Jamal Crawford of LA in Game 1 of their first-round series in the Western Conference.
(Photo from AP)

Joe Johnson scored 21 points including the game-winning layup at the buzzer to lead the fifth-seeded Utah Jazz to a 97-95 win over the fourth-ranked Los Angeles Clippers in Game 1 of their first round matchup in the Western Conference playoffs in the NBA.

Gordon Hayward added 19 for the Jazz, who stole homecourt advantage with the win.

Blake Griffin led the Clippers with 26 points while Chris Paul chipped in 25.

In other first round games on Sunday, the defending champion Cleveland Cavaliers escaped the Indiana Pacers, 109-108, the Milwaukee Bucks defeated the Toronto Raptors, 97-83, and the San Antonio Spurs routed the Memphis Grizzlies, 111-82.