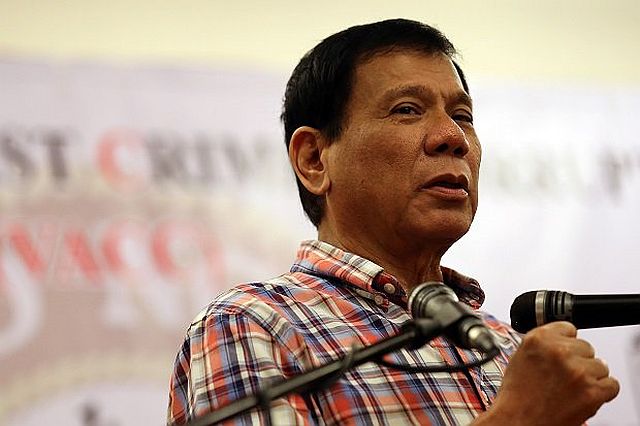 Duterte raises to P1M reward for the head of each of Abu Sayyaf hunted in Bohol; threatens to “invade Jolo”

He also encouraged the residents to kill the at least eight members of the bandit group who were believed to be trapped in the hinterland villages of Inabanga town, more than a week after they entered the town’s Barangay Napo purportedly to conduct terror activities in nearby islands.

“I encourage civilian to kill. Dead or alive yan may reward. Mas gusto ko yung dead kasi yung alive magpakain pa ako (The reward is dead or alive but I prefer them dead because if they are alive, I will still have to feed them),” he told reporters after a security briefing with top military, police and government officials here on Wednesday afternoon.

Mr. Duterte arrived in Bohol past 3 p.m. for a briefing on what happened in Inabanga town where at least 10 ASG members entered on board three motorboats on April 10.

Also killed in the firefight were a local couple in their 60s, three soldiers and a policeman.

At least eight ASG members, however, managed to escape the government cordon and are believed to be hiding somewhere within the town’s subterranean caves or its neighboring areas.

He told reporters in an ambush interview after the meeting that Abu Sayyaf went to Bohol to spoil the pre-summit meetings for the Association of Southeast Asian Nations (Asean) in Panglao town, which would officially start today, Thursday.

The Asean-Hong Kong, China Free Trade Agreement (AHFTA) Trade Negotiating Committee and Related Meetings slated on Paglao Island in Bohol from April 18 to 22 have over 200 participants from the ten member-countries of the Asean and from Hong Kong.

The President encouraged civilian participation in killing of the Abu Sayyaf members who are now believed to be hiding in villages near Barangay Napo in Inabanga where the encounter took place.

“My order to the police, lahat even civilians who are interested to fight and kill, ang order ko is dead or alive,” he said.

“Kung nakapatay ka (If you kill one) you don’t have to worry. You just go to the police and make the report, state your truth . . . and I will take care of you,” he said.

President Duterte said Abu Sayyaf members usually have local contacts in the area they go to, most of whom are also criminals.

Mr. Duterte didn’t elaborate on how to arm civilians.

“I’m not at liberty because I have to talk to the local officials, they might have some objections. . . . I would like to hear first what the Army (has to say) . . . what the situation on how to arm the civilians,” he said.

President Duterte also advised the Philippine Navy to bomb bandits if found in the sea.

(My order to the Navy, if positive, bomb them. No need for them to surrender. Fire a cannon at them. Destroy them.)

He said if there is a need to finish the bandit group, he will invade Jolo.

(This will be an invasion. But many will get hurt, civilian, children. If our country will be in danger, I will order an invasion of Jolo. The Army, the military, will go there. It they want a fierce fight, I will give them one.)

This developed as a 3,200-strong Cebu-Bohol Security Task Group (STG) was deployed in the province on Wednesday morning for the Asean trade meeting on Panglao Island, a resort-town connected to Tagbilaran City via a causeway.

Chatto said the Asean meetings in Bohol will help improve the economy of the province.

“We give the red carpet reception and welcome because we are opening Bohol to the rest of Asean and introducing Bohol to Asean and showcasing the best of Bohol and the people,” he said.

Chief Supt. Noli Taliño, police director for Central Visayas who is the overall commander of the Asean security group in the region, said that security and emergency personnel will be stationed at various key areas in Bohol to secure the around 200 Asean senior officials attending the AHFTA trade meet.

Taliño, meanwhile, said they received many information about the ASG remnants even before the reward was announced.

Yesterday, the Armed Forces of the Philippine Central Command (Centcom) announced that a concerned citizen was willing to give P800,000 for information leading to whereabouts of the ASG members hiding in Bohol, or at P100,000 per ASG member found.

Taliño said they were also still verifying the information that the remaining terrorists were hiding in the boundary of Inabanga and Clarin.

Taliño added government troops are still concentrating in Inabanga in searching for the remaining ASG members as security forces believed the militants were still in the area.