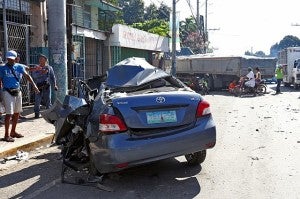 The driver of this wrecked Toyota Vios was killed after it collided with a truck in Minglanilla town last April 21, 2017. Barely a week after, on Thursday, a motorcycle rider was also killed after his motorcycle collided with a truck early in the morning. According to Minglanilla Police chief Dexter Calacar, most accidents in Minglanilla happen early morning because drivers tend to speed up as the main road is very wide. (CDN FILE PHOTO)

A 37-year-old man was killed early morning Thursday after he rammed his motorcycle on a parked cargo truck in Minglanilla town, 17 kilometers south of Cebu City.

Levi Salvan was on his way home to Barangay Basak San Nicolas in Cebu City at about 1 a.m. when his motorcycle rammed into the back of the cargo truck in Barangay Tungkop, Minglanilla.

Minglanilla Police chief Supt. Dexter Calacar said the cargo truck driven by Emil Omaña was temporarily parked along the side of the road as the passengers went out of the vehicle to buy bread.

(The truck was parked and its emergency lights were on because the driver and his companions went out to buy bread.)

Omaña told the police that he was surprised to hear a loud thud coming from the back of his truck.

When he went to the back, he saw Salvan lying unconscious on the road, covered with blood.

The victim was rushed to the Minglanilla District Hospital, but he was pronounced dead on arrival.

He sustained severe head injuries because of the impact.

Calacar said that according to the witnesses, Salvan was driving fast.

(Salvan seemed drunk because he was driving very fast.)

Omaña was released from prison yesterday afternoon after the family of Salvan opted to settle the matter.

Calacar admitted that most of the accidents in Minglanilla happen at dawn because drivers tended to speed up as the main road is very wide.

(The roads are wide here so drivers tend to speed, especially because at dawn, there is hardly any traffic.)

He said drivers should not go over 80 kilometers per hour because over that, it would be difficult to break and stop the car on time.

He said he will ask the local government to put up an 80-km speed limit sign.