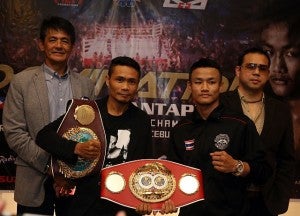 For ALA Promotions International top honcho Michael P. Aldeguer rushing things out might end up badly.

That’s why one of the most exciting young Filipino boxers, Mark “Magnifico” Magsayo, who happens to be one of his prized wards, will have to settle for a 10-rounder tune-up showdown against an unheralded Tanzanian boxer in tomorrow’s co-main event of “Pinoy Pride 40: Domination” at the Waterfront Cebu City Hotel and Casino.

Magsayo broke through the mainstream boxing after his epic showdown against former world title challenger and knockout artist Cris Avalos of the United States at the Cebu City Sports Center (CCSC) in April 2016. Magsayo scored a sixth-round technical knockout win over the favored Avalos.

The 21-year-old Boholano, who has an unbeaten record of 15 wins with 11 knockouts and also the current WBO International featherweight champion and ranked number six in the WBO featherweight division, will fight Issa “Peche Boy” Nampepeche of Tanzania, who sports a record of 24 wins, 11 knockouts coupled with seven defeats and four draws.

“He’s still young,” said Aldeguer. “As a promoter’s standpoint, he’s a work in progress. I know he (Magsayo) will become a great fighter, but there’s no point in rushing things because he needs to work on a lot of things and we have seen that on the Avalos fight. He may have knocked out Avalos, but it also exposed a lot of things that needed to be improved for Magsayo. I know he will get there on top.”

Aldeguer is also looking to give Magsayo a chance to possibly headline a fight card on July depending on his performance against Nampepeche tomorrow night. “People say that his fight against Nampepeche will just be a walk in the park, but we don’t know. The Tanzanian boxer can also fight very well, so let’s see on Saturday night if Magsayo’s ready for bigger fights. We have to be realistic and learn from our past. We don’t want Mark Magsayo ended up like Boom-boom Bautista and AJ Banal,” added Aldeguer.

Meanwhile, two-division world champion Donnie “Ahas” Nietes (39-1-4,22KOs) laughed off his opponent’s statement Komgrich Nantapech (22-3-0,15KOs) who said in an interview that his youth will overcome the “Old Nietes” in their main event showdown for the vacant IBF world flyweight title. “Let me tell him this. I am getting old but my body is getting younger. I’m like a fine wine, I get better with age,” said 34-year-old Nietes who guns to become a three-division world champion.

Nantapech vowed to defeat Nietes and duplicate the upset his fellow Thai, Srisaket Sor Rungvisai pulled off when he won over former pound-for-pound champion Roman Gonzales by majority decision in New York, USA. “I have a chance of knocking him out. I feel more powerful and faster in the regular flyweight division, but I won’t be complacent. I will deal with him with caution,” added Nietes.

The official weigh-in of Pinoy Pride 40: Domination will be held at the Robinson’s Galleria Cebu at 12 noon. The fight card will feature a total of eight bouts. The curtain raiser will start at six in the evening.